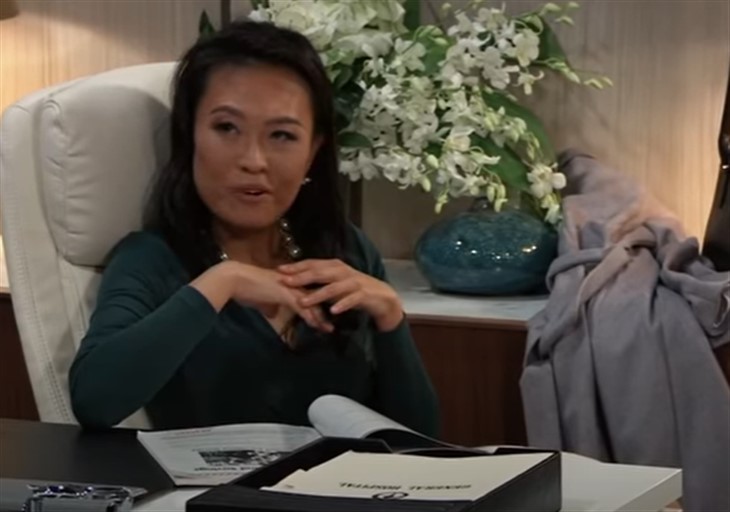 General Hospital Spoilers tease that Selina Wu (Lydia Look) has been away for several weeks, but she will likely be back very shortly. Brad Cooper (Perry Shen) is indebted to Selina for helping him secure parole for his part in keeping Wiley Corinthos (Caleb & Kyler Ends) away from his father, Michael Corinthos (Chad Duell).

As viewers know, Selina represents one of the Five families, the mob families in Port Charles and the surrounding areas. Selina seems to have taken quite an interest in Brad, and that could lead Brad down a very dark path.

Sonny Corinthos (Maurice Bernard) asked Selina to eliminate Peter August (Wes Ramsey) after Peter was responsible for Jason Morgan’s (Steve Burton) death. In return, Sonny agreed to have his contacts on the parole board vote favorably for Brad’s release.

But Selina had Brad given Peter the poison that almost killed him while they were both still incarcerated. Selina seems to wants Brad to join the family business, and killing Peter was likely just beginning. Peter survived, but was in a coma for several months so Brad hasn’t crossed that line just yet. But if his Aunt has anything to say about it, it’s just a matter of time.

According to General Hospital spoilers, Selina has already tried to take steps to remove anything left from Brad’s life before he was incarcerated. She approached Dr. Britt Westbourne (Kelly Thiebaud) even before Brad was released to stay away from Brad. As viewers know, Brad and Britt are very close friends.

Selina claims that Britt is a bad influence of Brad and threatened her if she didn’t stay away. While its true that at one point Britt was a bad influence, she has really changed. And yet, Selina doesn’t want them anywhere near each other. This is most likely so she can mold Brad into the mobster that she wants him to be.

Britt disregarded Selina’s warning and has spent as much time as she can with her best friend. But once Selina returns, that all might change. Selina might act upon her threats and put Britt in grave danger. Or she might just threaten to do so if Brad doesn’t stay away from her. Either way, it’s not going to be easy for Brad to escape Selina’s plans for him, whatever they might be.

Does Selina want Brad to join the mob? Could Brad ever become the man Selina wants? Or will Britt be able to help free Brad from Selina’s influence? Anything can happen in Port Charles so stay tuned to General Hospital airing weekdays on ABC. And don’t forget to check back right here regularly for all your General Hospital news, information and spoilers!