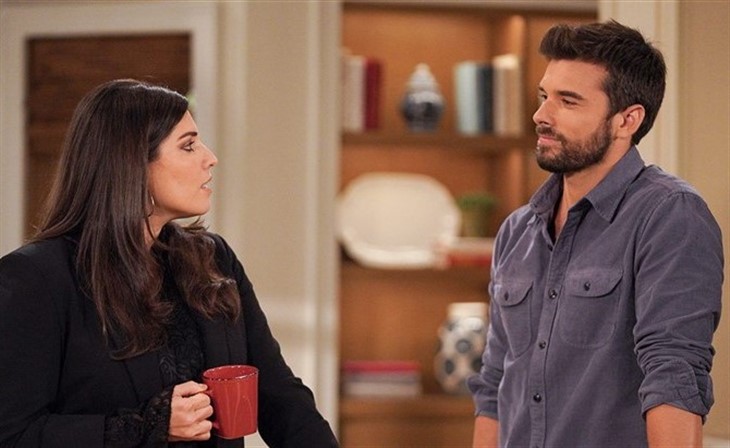 General Hospital spoilers and updates for Tuesday, May 17 tease there will be offers from some and suspicions by others in the next GH episode!

General Hospital Spoilers – All Will Be Revealed In Due Time

Harrison Chase (Josh Swickard) and Brook Lynn Quartermaine (Amanda Setton) are still talking in the Metro Court Gardens after Leo Quartermaine’s (Easton Rocket Sweda) performance. Later, Leo will remind Chase of a promise he made, but for now, Chase tells Brook Lynn that all will be revealed in due time. Little do they know that someone they’d rather not reveal himself is lurking and watching them from behind the bushes and will interrupt a close moment the next day!

But for now, the conversation is pleasant and they are both so proud of Leo. Leo was focusing on Chase during his poetry reading like there was no one else there and Chase will be sure to keep that promise!

Previous General Hospital episodes revealed that Ava Cassadine (Maura West) had tried to encourage Trina Robinson (Tabyana Ali) over her impending court hearing, as they heard an argument outside of Kelly’s. Portia Robinson (Brook Kerr) had laid into Spencer Cassadine (Nicholas Chavez) over him and his awful girlfriend ruining Trina’s life. Ava took Spencer inside while Trina left with her mother. Ava, Trina and Portia had been planning lunch together until Spencer came along!Ava tells someone “it’s the vast minority” and she may still be talking to Spencer about his awful girlfriend Esme Prince (Avery Kristen Pohl). The “vast minority” she is referring to is probably the number of people who actually believe Trina is guilty of the crimes Esme framed her for!

General Hospital Spoilers – How Can She Not Appreciate That?

Meanwhile, back at Wyndemere Castle, Esme is alone with Nikolas Cassadine (Marcus Coloma) whom she appeared to be drawing near to kiss as Monday’s GH episode drew to a close! Esme is spinning her seductive web around Nikolas, in an effort to obey her dastardly daddy Ryan Chamberlain’s (Jon Lindstrom) orders to get Nikolas into bed with her! Esme expertly plays to Nikolas’ weaknesses and insecurities over his relationship with Ava as she had held his hand and offered her sympathy.

Esme asks Nikolas how Ava could not appreciate that, likely referring to how Nikolas has gone out of his way to romance her, still rejecting his advances? Esme herself is the cause of that, and Nikolas being gullible and feeling sorry for the lost little waif act as he continues to let her stay at the castle!

GH Spoilers – What’s In it For Us?

Gladys Corbin (Bonnie Burroughs) wants to know what’s in it for “us” as she seems to be swooping in for the kill regarding something! It’s a fair question as to whom she may be talking to or what she may be talking about although someone has obviously made her an offer! Later, she will figure out what her daughter Sasha Gilmore Corbin (Sofia Mattsson) has been up to, presumably that she’s back on drugs.

It’s possible Gladys may be approached with an attractive deal from that pesty paparazzi Felty (Brian Norris) to get his photo card back Gladys stole and looked at! But Gladys can be a real double dealer, almost as duplicitous as a Cassadine; he’d better make sure that card hasn’t been erased before he makes any deal!

General Hospital Spoilers – Count Me In!

Michael Corinthos (Chad Duell) and Drew Cain (Cameron Mathison) are still talking about their Aurora Media/ELQ merger after previously offering Ned Quartermaine (Wally Kurth) a COO position. They are still at the Metro Court Gardens also when Carly Corinthos (Laura Wright) approaches them with an unexpected offer, after Ned left for a few minutes. Carly asks if they need an investor to count her in – it’s obvious she’s looking to help out with the new company as she excitedly smiles!

Of course Carly would want to help, since Michael is her son and Drew is her friend, even though she might secretly hope there’ll be more down the line! Whether they have gotten to the stage in the merger where they are taking investors should soon be revealed!

GH Spoilers – We Can Both Get What We Want

The call Ned took and had to leave for a few minutes over was a meeting with Valentin Cassadine (James Patrick Stuart) behind the bushes near the Metro Court Gardens. Valentin doesn’t want to lose his CEO position with ELQ and neither does Ned because of the company merger. Valentin’s stocks will be greatly diluted once the merger goes through, and he’s trying to get Ned on his side. He tells Ned that he has an idea about something they can do to make sure they both get what they want!