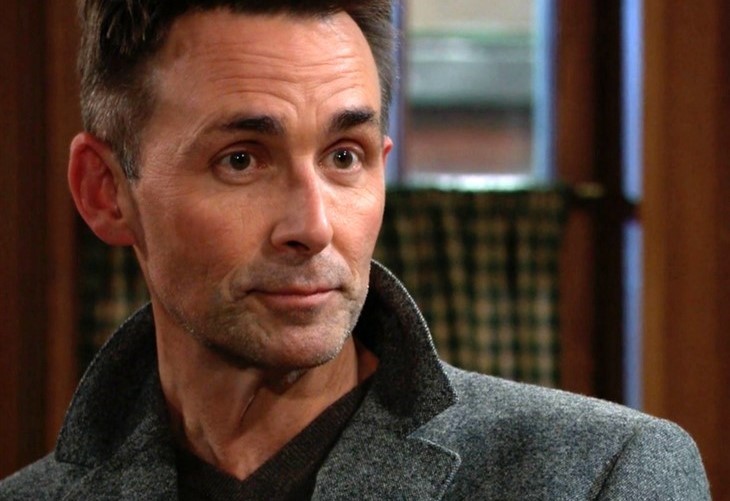 General Hospital spoilers and updates tease there will be conniving, confronting, and catastrophes on the next GH!

At the Metro Court in a suite, there appears to be a mysterious meeting between Valentin Cassadine (James Patrick Stuart) and someone else! Valentin tells the mystery man – or mystery woman – “long time no see” so it can’t be Anna Devane (Finola Hughes), he just had a date with her a few days ago! Chances are, it’s Victor Cassadine (Charles Shaughnessy) who he’s been trying to dodge but you can’t dodge a Cassadine forever!

Victor has made several phone calls that Valentin hasn’t answered, and he’s been doing his best to avoid his father! However, it looks like he can’t avoid him any longer so they meet at the hotel!

Meanwhile, Anna is over at Kelly’s having tea and a snack with Felicia Scorpio (Kristina Wagner) and talking about Valentin. Anna’s suspicious as it sounds like Valentin may have had to dodge her to catch up with Victor, because she tells a frowning Felicia there’s more going on than ELQ! Anna was trying to get some information out of him when they were on their recent drive-in date but he maneuvered her away from shop talk! There had been a near miss when Valentin, Anna and Felicia were in French Polynesia at the same time and he was undercover. The question remains as to who he was working for – Victor, the WSB, or himself; he did make sure the Ice Princess got to the WSB and not to his father!

At the Metro Court pool, Nina Reeves (Cynthia Watros) and her aunt, Liesl Obrecht (Kathleen Gati) finally catch up with each other, and talk about their love lives. Liesl recently turned down a proposal of marriage from Scott Baldwin (Kin Shriner) but they didn’t break up, she apparently didn’t want to make it legal! As for Nina, things seem to be escalating between herself and Sonny Corinthos (Maurice Benard) although he seems to want to go faster than she does!

The two women smile at each other and Nina laughs, as she tells Liesl it sounds like she approves of her and Sonny as a couple! Now that Sonny’s been told there is no reconciling with Carly Corinthos (Laura Wright) things are moving quickly!

GH Spoilers – This Is Going To Get Bad!

At the Quartermaine mansion, Olivia Quartermaine (Lisa LoCicero) is still upset in the wake of the merger that didn’t happen because Ned Quartermaine (Wally Kurth) decided on team Valentin! She tells Ned she doesn’t think he realizes how bad this all is going to get, and he’s basically alienated his family already. Drew Cain (Cameron Mathison) and Michael Corinthos (Chad Duell) were both very angry and disappointed, as well as Brook Lynn Quartermaine (Amanda Setton)! Ned claimed it was the ELQ bottom line he was protecting and Valentin had brought them out of the red, but everyone else thinks he chose pride and prestige over protection! She hasn’t even mentioned what she’ll face if Carly can’t get her half of Metro Court back!

At the Metro Court, Drew has arrived to give Carly the bad news; the news of the failed merger had gone public, Aurora stock plummeted, and Carly’s out her investment! Drew tells a blindsided Carly that Michael has also taken a big financial hit. Carly will have thirty days to get her money back from her investment company but will she have the funds? Viewers will recall she didn’t ask anything from Sonny in the divorce so the Metro Court was her whole living!

This, of course, leaves her partner Olivia in the lurch as well which is why she was so upset at Ned! Carly’s going to have to do some fancy financial footwork to recover!

Meanwhile, back outside the Quartermaine mansion, Michael is on the phone, likely talking to his plant Dex (Evan Hofer) who is “working” for Sonny. Viewers know he’s really working for Sonny’s ruination along with Michael, but Sonny will probably find out – thanks to Leo Quartermaine (Easton Rocket Sweda) who’s lurking and listening! Michael tells Dex they’re going to have to get creative, unaware that a Corinthos catastrophe of a different type is happening at the Metro Court pool! He’ll get the dire news eventually, possibly from Sasha Gilmore Corbin (Sofia Mattsson) who is watching the catastrophe unfold!

General Hospital Spoilers – Falling, But Not For Michael Corinthos

At the Metro Court pool, Willow Tait (Katelyn MacMullen) has collapsed and looks like her eyes are rolled back in her head! She fainted dead away into Sonny’s arms next to the pool, and now it looks like she’s falling in and him with her! Liesl, Nina and Sasha watch in horror as they shout “oh no!” in the background.

Eyes rolled back in the head could be indicating she’s having a seizure so it’s good Liesl is nearby. She can help Willow until the GH ambulance arrives with paramedics.