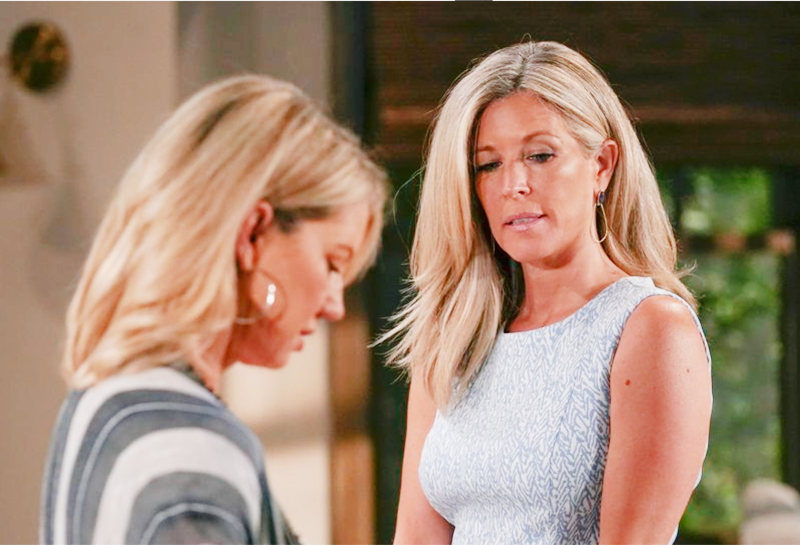 General Hospital (GH) spoilers and updates for Tuesday, July 12 tease surreal surprises and pending plans people hope will work on the next GH!

As Trina Robinson’s (Tabyana Ali) trial is set to begin, Portia Robinson (Brook Kerr) worries about her daughter’s mental state. At GH, she worries to Curtis Ashford (Donnell Turner) and his father, Marshall Ashford (Robert Gossett) that they won’t be able to find anything to exonerate her daughter in time. Everyone in Trina’s family and amongst her close friends have been trying to find a last minute save that will prove she was framed!

Curtis and Marshall try to reassure Portia that they’ve got something going, after Marshall previously called a music contact who knew how to find dealers of black market phones! Curtis tries his best to be reassuring as he tells Portia there’s already another plan in motion!

At the Metro Court Pool, Trina and Officer Rory Cabrera (Michael Blake Kruse) talk in the aftermath of their first kiss. The company, the homemade brownies picnic and everything else was a welcome distraction from the worries over the outcome of her trial. Still, she tells Rory that this can’t happen again – undoubtedly referring to that kiss even though it was obvious she gladly participated! Being the daughter of a retired Port Charles Police detective, Marcus Taggert (Réal Andrews) she knows that a cop and a possible convicted felon shouldn’t get involved! It could mess up both her court case and his career!

General Hospital Spoilers: Let Me Do This For You!

At her office – make that her former office – in the Metro Court Hotel, Carly Corinthos (Laura Wright) is interrupted by an unwelcome visitor! Carly has run out of options to save her half of the Metro Court Hotel, and was in the process of saying goodbye when she receives an unwelcome visitor. Nina Reeves (Cynthia Watros) comes through the door and Carly tells her to get out, there’s nothing she can do for her.

Olivia Quartermaine, (Lisa LoCicero) and Sonny Corinthos (Maurice Benard) had just been talking about Carly losing her half of the hotel and how she stubbornly refused their help! Olivia had told Sonny someone bought it-and it was Nina, and now she’s arguing with Carly to let her do this for her, intending to give it back to Carly!

GH Spoilers: You Cannot Be Okay With That!

Sonny, Olivia, and now Drew Cain (Cameron Mathison) as well wonder what happened with the hotel and who bought Carly’s half. Drew is frustrated as he tells Olivia she cannot be okay with that! Drew had also tried to bail Carly out by trying to sell Crimson Magazine to Nina, and Nina had declined; she suspected he had another angle. Olivia and Drew will be even less okay when they find out who that buyer of Carly’s half of the Metro Court is. Even Sonny will suspect Nina’s motives!

General Hospital Spoilers: I Need You To Look Into Some Information For Me

Sonny’s on the phone with someone, and tells them he needs them to look into some information for him. He may be trying to find out who bought Carly out, but on the other hand, he may be trying to find information about Esmé Prince (Avery Kristen Pohl)! Sonny had given Spencer somewhat of a tongue lashing over his shifty girlfriend, as Sonny called her, having no idea Spencer’s pulling a scam on her.

Spencer will up his game trying to prove Esmé framed Trina now that he saw Rory kiss her! Meanwhile, Sonny knows that Esmé is still scared of him, one of the few people she knows to be afraid of!

Carly is telling Sonny, and probably Drew and Olivia as well that the most surreal thing happened; she’s obviously referring to Nina’s having bought her half of the Metro Court! That probably won’t be what she describes as surreal, but Nina making her grand gesture to give it back to Carly, no strings attached! Carly could very well evict Nina from her office space, raise the rent to impossible levels, or other vindictive things although she didn’t try. It would be even more surreal if Carly took her up on it but that would be just so not Carly!

General Hospital Spoilers: All I Care About Is The Fallout

Brando Corbin (Johnny Wactor) visits Sasha Gilmore Corbin (Sofia Mattsson) in her hospital room after agreeing to a seventy-two hour psych hold. Sasha had a break with reality on the Heart and Home program where she was appearing as The Face Of Deception where the shopping channel was going to sell their product. Flora Gardens (Susan Batten) another seller on the program had given Sasha a baby carrier complete with baby doll and she thought it was Liam Corbin (uncast character).

It probably hadn’t helped that Felty (Brian Norris) had given her some pills to pop that could have had a hallucinogenic affect! Brando tries to convince Sasha that she needs some serious help, but she says all she cares about is the fallout after her bungled appearance!

DOOL Spoilers: Chloe And Nancy Are Suspicious Of Leo!