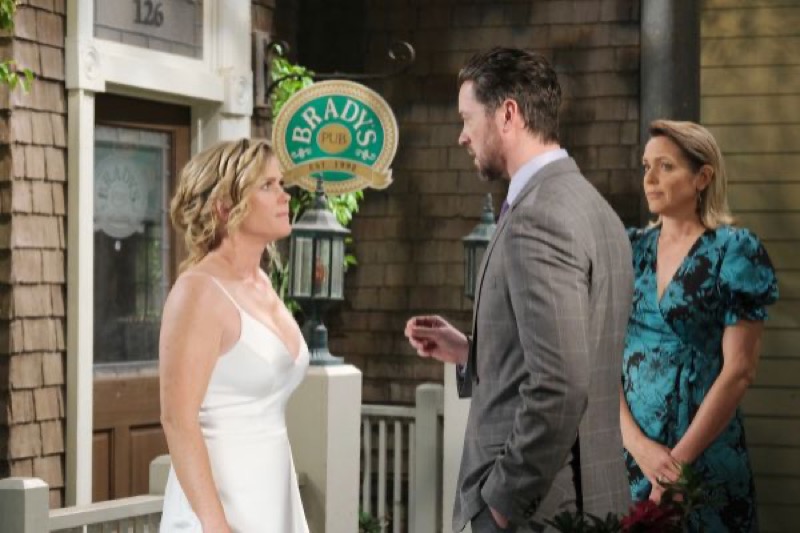 Days of Our Lives (DOOL) spoilers for Tuesday, July 12, 2022, reveal Sami is determined to marry Lucas although she is also not so sure she wants to marry Lucas. That should mean this marriage would be doomed from the start if it even happens.

Days of Our Lives Spoilers: Cold Feet For Sami?

While this latest attempt at marriage with Lucas Horton (Bryan R. Dattilo) seems like a grand idea to Sami Brady (Alison Sweeney), seeing EJ DiMera (Daniel Feuerriegel) right before she is to make it to the church makes her re-think things. There still seems to be something between them and she is beginning to realize that there also might be something between EJ and her sister, Belle Black Brady (Martha Madison).

So, what is Sami to do in this situation? Well, affirm her decision because there’s no reason for her not to marry Lucas, right? Yes, there are many reasons for Sami not to marry Lucas, the first among them being he is the one who had her kidnapped and held hostage for months last year just so he could run in and play hero and rescue her. But will Sami change her mind before that truth is even revealed?

Chad DiMera (Billy Flynn) might be one of the few people who knows what Lucas was up to with Sami, but he is too preoccupied with trying to find Abigail DiMera’s (Marci Miller) killer to even think about this wedding. However, Chad is about to learn something that will make him change his entire outlook on this case. Maybe he has been looking in the wrong direction this entire time.

While Allie Horton’s (Lindsay Arnold) parents are getting ready to marry once again, her twin brother, Johnny DiMera (Carson Boatman), is ready to fight her for Chanel Dupree’s (Raven Bowens) affections. How did Chanel ever get so lucky to have these two people in a war for her affections?

Chanel is still not 100 percent sure what she wants, but she might also be enjoying what is happening to her. Maybe one of them will be good comfort now that she had to say goodbye to her sister, Lani Price Grant (Sal Stowers) Stay tuned to Days of Our Lives weekdays to see who those suspects end up turning out to be.