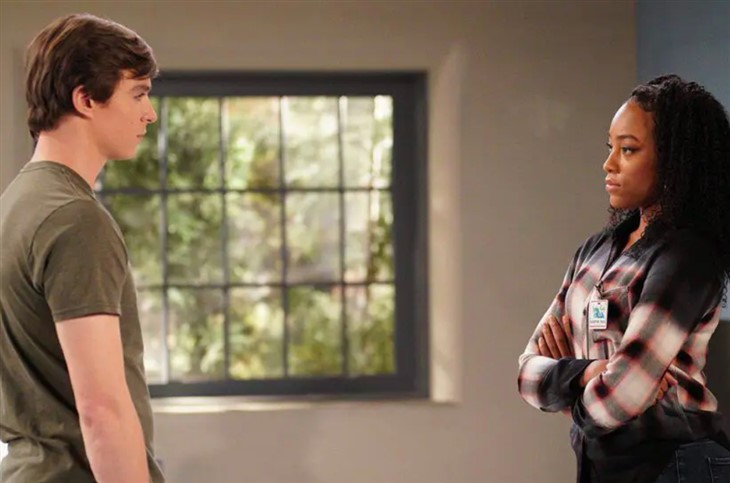 General Hospital (GH) spoilers tease that Esme Prince (Avery Kristen Pohl) is the person who not only recorded Cameron Webber (William Lipton) and Josslyn Jacks (Eden McCoy) having sex for the first time, but she also uploaded the whole thing to internet where it has been viewed by anyone who wanted. And while Damian Spinelli (Bradford Anderson) has done his best to contain the damage, once something like that is out there, its out there for good. Joss has been especially traumatized by the video, so now the investigation begins and unfortunately Esme has made it look like Trina Robinson (Sydney Mikayla) is the guilty party.

General Hospital Spoilers – Trina Robinson Was The Only Person Present At The Cabin At The Time!

Esme set up a phone to record on a timer so she didn’t have to actually be present. She came back for the phone on a later date. But Trina was there that night, although Esme had drugged her so Trina can’t completely account for her time or her actions. To make matters worse, Esme phoned in an anonymous tip that it was Trina who made the video and uploaded it. This will be especially heartbreaking for Joss, since she and Trina are so close. But with the evidence piling up, even Joss will begin to doubt her friend.

GH Spoilers – Trina Robinson Will Have Her Family On Her Side!

With the evidence piling up, it’s just a matter of time before Trina is arrested for the crime. But Trina has a lot of people in her corner, namely her mother Dr. Portia Robinson (Brooke Kerr) and father Marcus Taggert (Real Andrews). Taggert is a former police officer and he will most likely take it upon himself to make sure Trina is cleared. He’s already heard that Esme has been giving Trina problems for awhile. So that’s likely where his investigation will likely take him.

General Hospital Spoilers – Marcus Taggert Is On The Case!

Taggers is a very good investigator. So once he begins looking into Trina, he may find out about her connection to serial killer Ryan Chamberlain (Jon Lindstrom). It seems as though Esme is Ryan’s daughter although the specific details haven’t been revealed just yet. Look for Taggert to not only find evidence linking Esme to the video but also her connection to Ryan. Taggert may be the key to Trina being cleared and Esme getting what she deserves finally!

Will Trina be arrested? Will she stay in jail even for a night? Will Taggert be the one to save her? Anything can happen in Port Charles so stay tuned to General Hospital airing weekdays on ABC. And don’t forget to check back right here regularly for all your General Hospital news, information and spoilers!