GH Spoilers: Spencer’s Shocked When He Finds Esme In Bed With His Father! 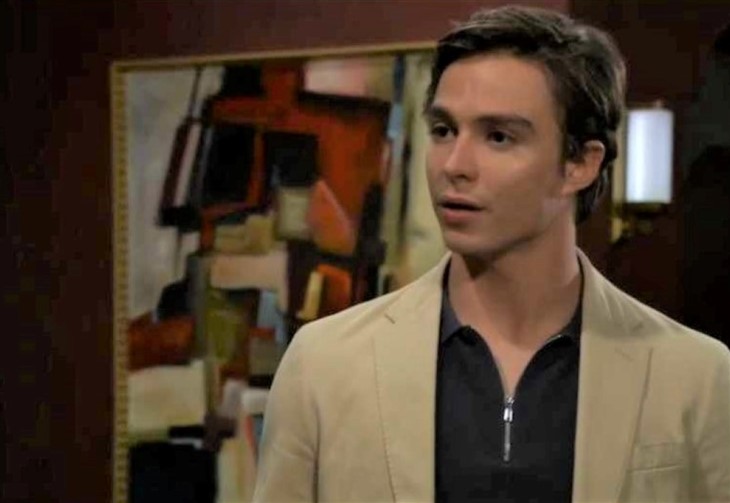 General Hospital (GH) spoilers and updates tease that Spencer Cassadine (Nicholas Chavez) will be shocked at his welcome home party when he finds Esme Prince (Avery Kristen Pohl) in bed with his father in an upcoming episode of General Hospital!

General Hospital viewers will recall that Esme had been assigned a task by her birth father, Ryan Chamberlain (Jon Lindstrom) and he felt the need to speak and remind her of it in a recent episode of General Hospital! Viewers will recall Ryan risked exposure for faking his locked-in syndrome for over a year and Esme couldn’t believe he did either, but he was upset enough at her getting sidetracked with Spencer and his friends to get her back on target.

Her task was to get cozied up first with Spencer at boarding school, and then follow him to Port Charles after their graduation from the school in France, where she was to use Spencer to get close to his parents. Then she was to break up Nikolas and Ava Cassadine (Marcus Coloma, Maura West) so Ryan could get Ava back with no interference from Nikolas, Spencer’s hatred of Ava being the way Esme would get close to him other than sex.

General Hospital viewers will recall that they started over a year ago gaslighting and stalking Ava with Ryan’s “signature” on bizarre gifts including a talking teddy bear for Avery Jerome-Corinthos (Ava and Grace Scarola) with Ryan’s voice! General Hospital viewers saw that after Spencer was seen around Port Charles going by “Victor” it wasn’t long before Nikolas and others learned Spencer had come back when he revealed himself with a big party at Wyndemere Castle, where Esme first showed up.

Nikolas soon exposed his son as the stalker who was gaslighting Ava even though it was Esme who set her car on fire outside the Jerome Gallery, with a morbid finishing touch of her late daughter Kiki Jerome’s (Hayley Erin) work badge under the car! Ava was terrified, because Kiki’s badge had been buried with Kiki – who had been one of Ryan’s victims, and perhaps he’d made a copy of the badge and gave it to Esme!

General Hospital viewers will recall that Ryan told Esme she’s going to have to up her game to break up Nikolas and Ava, and she wasn’t real happy about it – she threatened to expose his fakery to Kevin Collins (Jon Lindstrom) and he grabbed her arm! General Hospital viewers will recall that Ryan hurt Esme’s wrist and put some very bad bruises on it, and told her in not so many words to get Nikolas in bed!

It should be a set up so that Ava will find them together and that should make Ava angry enough to divorce Nikolas, and then Ryan will make his moves. As luck would have it, when Esme went to Nikolas and Ava in the Metro Court getting friendly with them, while Ava had to leave and he walked her out, Carly Corinthos (Laura Wright) stormed in and grabbed Esme’s arm! Nikolas returned just in time to see Carly hurt Esme and threatened to call the police and took Esme to the emergency room!

General Hospital viewers can imagine that it will take more than Nikolas displaying what could be taken as fatherly affection and protection for Esme to seduce him. General Hospital viewers suspect that she may take a page from Nelle Benson’s (Chloe Lanier) playbook when she wanted Carly to think Sonny Corinthos (Maurice Benard) and she had sex. Nelle had drugged Sonny and undressed him and undressed herself so it would look that way, and Esme may do the same with Nikolas, although she might give him an aphrodisiac drug.

However, Esme’s plan to set up Ava to think she and Nikolas were in bed having sex may backfire royally, when instead of Ava walking in and finding them Spencer does! But Esme will figure something out – she’ll claim revenge for Spencer’s perceived affair with Trina Robinson (Tabyana Ali) but for Spencer, it will be a double betrayal and a permanent rift between him and Nikolas!