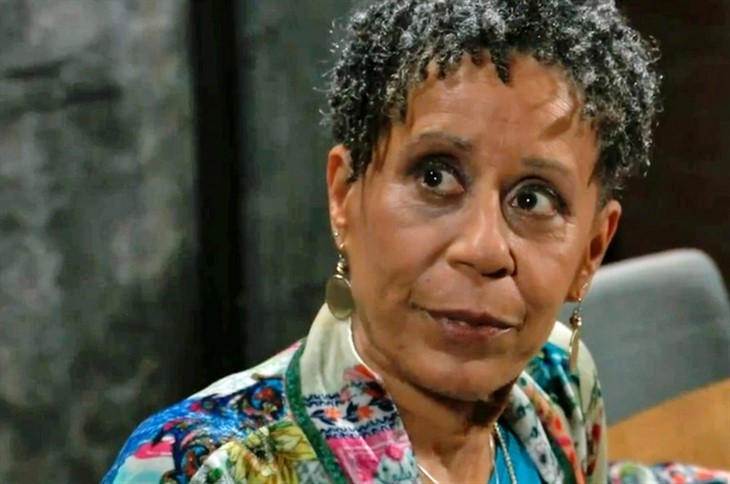 General Hospital spoilers for Thursday, May 19 tease some in Port Charles will make discoveries, some will have realizations, and others will experience rejections in the next GH!

General Hospital Spoilers – He Has Something Most People Never Get

Stella Henry (Vernee Watson) is having a nice dinner out with a couple of friends and talking. She’s sitting at a table, possibly in the Metro Court, with Portia Robinson (Brook Kerr) and Epiphany Johnson (Sonya Eddy). She tells them “he has something most people never get”.

It sounds like the topic of discussion might be Stella’s family, which would include Curtis Ashford (Donnell Turner) and TJ Ashford (Tajh Bellow). Stella had dropped in on Portia and Epiphany at GH and they decided to take the evening in a different direction.

GH Spoilers – Have We Come All This Way For Nothing?

In Brooklyn, TJ and Molly Lansing-Davis (Haley Pullos) are still in the restaurant where they were asking Mr. Purdee (uncredited character) questions about Marshall Ashford (Robert Gossett). Purdee was the shop owner who repaired Marshall’s clarinet, and he finally admitted he knew him and he goes by Marshall Parker. After Purdee left, Marshall walked in and he didn’t look especially happy to see his grandson and his domestic partner. TJ asks him if they’ve come all this way for nothing! Curtis is also on the way to Brooklyn to try and bring his dad back home!

At Kelly’s, Dr. Hamilton Finn (Michael Easton) and his father, Professor Gregory Chase (Gregory Harrison) sit at a table and talk. Later, Greg will enjoy the company of Violet Finn (Jophielle Love) and have fun together, but now, Finn is worried about his relationship with Elizabeth Baldwin (Rebecca Herbst). Finn tells his father that he’s losing her, which seems to be because of her increasing anxiety and fear of the strange occurrences plaguing her.

GH Spoilers – I Thought I’d Give It Another Shot

Back with Epiphany, it looks like she’s following up on her dreams to become a doctor as she sits in an office. She tells someone she thought she’d give it another shot, and it sounds like she wants to take exams, likely remembering Marshall encouraging her to follow her dreams! Epiphany looks bright and positive and excited about the prospect of doing something she’s always wanted to do, but settled for less. Hopefully whoever she’s talking to won’t shoot her down, because she’d been shot down before by less than encouraging male overseers at GH!

Back with Elizabeth, Finn has arrived to talk to her with Laura and Dr. Kevin Collins (Jon Lindstrom). The usually sweet and positive Elizabeth seems like a different person as she is angry and somewhat aggressive! Elizabeth tells her good friend-would be boyfriend Finn, her former mother in law Laura and her good friend Kevin she doesn’t want them there!

Finn, Laura and Kevin should be shocked and blindsided by Elizabeth’s demeanor, but it may give them some clues into what has been happening! Finn’s earlier comment about losing Elizabeth to Gregory may be truer than he could imagine, because it looks like she’s lost herself too!

GH Spoilers – It’ll Never Be Over!

Back at General Hospital, Carly Corinthos (Laura Wright) is talking to her mother, Bobbie Spencer (Jacklyn Zeman) after she overhears Carly picking up the DNA tests! Bobbie will have some questions and Carly is angry at Nina Reeves (Cynthia Watros), as she spits “It’ll never be over, what Nina did”! It sounds like perhaps she should be angry at Nina’s mother Madeline Reeves (Donna Mills) and Harmony Miller (Inga Cadranel) but neither one of them is around to tear into! It’s plain that whatever the results are Carly may not like the answers the DNA test provided to her!

General Hospital Spoilers – I’m Sure We Can Think Of Something

At The Savoy, Sonny Corinthos’ (Maurice Benard) arrival is welcomed and Nina is relieved after an uncomfortable encounter! They now sit at a table together and she smiles, as she tells Sonny she’s sure they can think of something! This is a bit of a turnaround since she previously thought maybe they should cool it for a while in public.

Nina’s visitation challenge hearing to be a part of Wiley Corinthos’ (Viron Weaver) life is coming up shortly. But now it doesn’t look like Nina or Sonny care if they’re seen together in public!