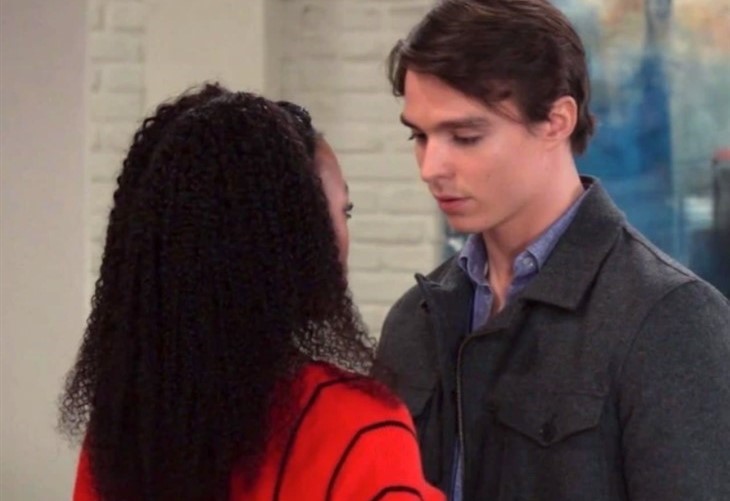 General Hospital viewers will recall from Wednesday’s episode of General Hospital, that Trina Robinson (Sydney Mikayla) finally opened up to her mother, Portia Robinson (Brook Kerr) about Esme Prince (Avery Kristen Pohl). Trina told her mother about the sex tape she is trying to frame Trina for making and disseminating of Cameron Webber (William Lipton) and Josslyn Jacks (Eden McCoy). General Hospital viewers will see Portia reach out to Curtis Ashford (Donnell Turner) with her concerns, tearfully admitting that she hopes she can protect Trina before it’s too late! She had told Trina to stay away from both Esme and Spencer Cassadine (Nicholas Chavez) who Portia called a criminal, but Trina’s obviously crushing on him.

General Hospital viewers can see that Trina is not listening to Portia about staying away from Spencer, as she showed up at Spring Ridge almost immediately to pay him a visit! General Hospital viewers will see that Trina has obviously made a decision to be truthful about her feelings for Spencer with him, as in tears, she challenges him. Trina tells Spencer if he wants to prove that he cares, then he needs to leave Esme; there is probably both romance and concern as a friend in Trina’s heart, as she knows that Esme is dangerous! Spencer is left in quite the conundrum as he must decide what to do and what to tell her!

General Hospital viewers will remember that Sam McCall, (Kelly Monaco) Dante Falconeri, (Dominic Zamprogna), and Drew Cain (Cameron Mathison) had come up with a plot to fool Victor Cassadine (Charles Shaughnessy) into revealing his true objectives. The problem is, as Laura Collins (Genie Francis), Sam, Dante, and Robert Scorpio (Tristan Rogers) were meeting to talk about it, Victor’s plant, Deputy Mayor Eileen Ashby (Heather Mazur) crashed it the meeting and reported the plot to Victor!

General Hospital viewers will see Sam and Dante have to adjust as they are in a surveillance vehicle, and Sam says they don’t have any time; it’s plain she’s worried about Drew. Drew is on the footbridge with Victor and Johann Bauer (Max Decker), with Drew asking Victor if this goes sideways, what happens to him – perhaps meaning Johann!

General Hospital viewers will see Carly Corinthos (Laura Wright) at General Hospital when Britt Westbourne (Kelly Thiebaud) appears to have some kind of news for Carly that is bad news she hasn’t heard yet! Carly looks shocked and in pain as Britt tells her she’s sorry, but she thought that she already knew; could it be something she didn’t know about how Jason Morgan (Steve Burton) died? Elsewhere, Carly’s now ex-husband is in the midst of a serious misunderstanding with Nina Reeves (Cynthia Watros)! Nina is beginning to realize that the gentle Mike she fell in love with in Nixon Falls and the gangster Sonny Corinthos (Maurice Benard) are polar opposites, as Sonny tells Nina she knows him and she cries in frustration as she tells him she knows Mike!