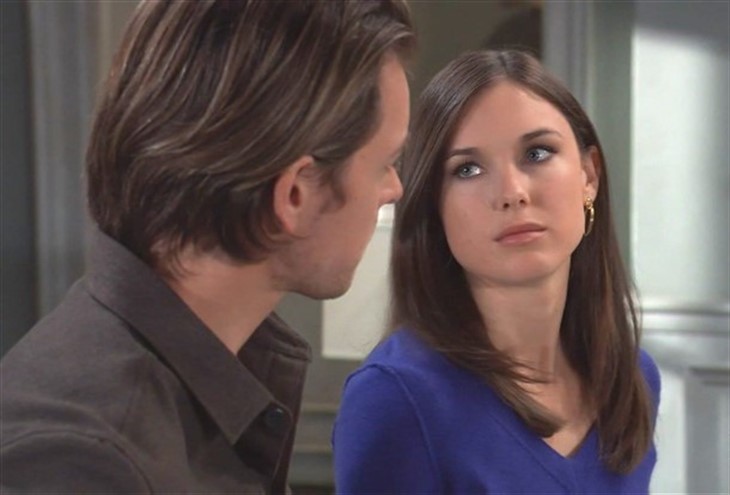 General Hospital viewers will recall that Willow Tait (Katelyn MacMullen) and Michael Corinthos (Chad Duell) have been waiting to take a trip to Paris for a while, but couldn’t because Willow lost her birth certificate! It looks like perhaps the fake birth certificate that Harmony Miller (Inga Cadranel) had made has possibly come in, but has it worked for Willow to get her passport – that is a very good question. Michael and Willow still have a dinner to celebrate, but General Hospital viewers see that something is still amiss, because she says something’s messed up; maybe the birth certificate isn’t working to get her passport! Of course, there is always the chance that Willow and Michael could be talking about something else that is messed up – his parents’ marriage, for instance!

General Hospital viewers will recall that Sasha Gilmore (Sofia Mattsson) and Brando Corbin (Johnny Wactor) first got lost on the way to the wedding chapel near Niagara Falls they were looking for, and then their car broke down! General Hospital viewers will see that Sasha is very impatient to go through with the wedding, as they stand in the garage waiting on the car to be repaired, she is afraid if they don’t get married right then they never will! Sasha and Brando will improvise, perhaps there is someone in the garage who performs weddings – after all, they are in Niagara Falls, the honeymoon capital of the United States! Meanwhile, back in Port Charles at the Metro Court, Gladys Corbin (Bonnie Burroughs) is just as impatient to stop the wedding, as she pleads with Carly Corinthos (Laura Wright) to help her stop the elopement!

General Hospital viewers will notice it’s a full house at the Metro Court, because Diane Miller (Carolyn Hennesy) and Alexis Davis (Nancy Lee Grahn) are there together too; General Hospital viewers will recall it’s been a while since Alexis had fun! Diane encourages her friend to get out there and have some fun, and tells her to go get it; it sounds like maybe Diane sees someone that might just fit the bill for Alexis to go have fun with! Alexis has not tried the dating game since Neil Byrne (Joe Flanagan) passed away the night they finally consummated their relationship, which sent her on a downward spiral that’s lasted a couple of years! General Hospital viewers would agree that Alexis needs to cut loose a little bit and try to move on with her life!

General Hospital viewers see Felicia Scorpio (Kristina Wagner) also at a table in the Metro Court talking to someone, likely her husband Mac Scorpio (John J. York) who has finally been released from General Hospital after being shot. Felicia and Anna Devane (Finola Hughes) will be going undercover as part of a plan involving her, Anna, Robert Scorpio (Tristan Rogers) and others to take down Victor Cassadine (Charles Shaughnessy). As Felicia and Mac talk, Robert and Anna reconnect while waiting for them, and Anna notes to Robert that as soon as one nightmare ends, another one begins! Felicia, Robert, Mac, and Anna will continue to try and flesh out the plan and work out the details.

General Hospital viewers will recall now that Maxie Jones (Kirsten Storms) and baby are home and safe, she told Austin Gatlin-Holt (Roger Howarth) she’s ready to give romance a try. At General Hospital, Maxie gives Austin some ground rules, calling them lessons – she tells him the first lesson is that she means what she says! Elsewhere, Nina Reeves (Cynthia Watros) has news for Sonny Corinthos (Maurice Benard); she’s suing for visitation of Wiley Corinthos (Viron Weaver). General Hospital viewers will recall that she’s been banned from seeing their mutual grandson!

Counting On: Critcisim Arrives As Duggar Boys Assist With Relief In Ukraine