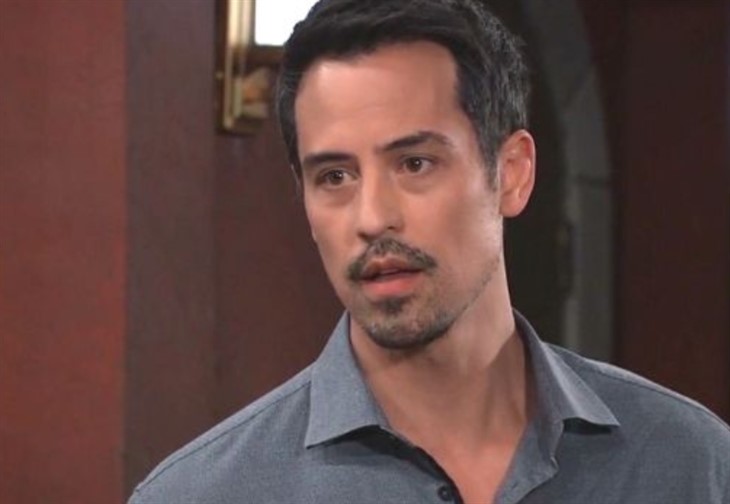 General Hospital (GH) spoilers and updates for Thursday, June 9 tease there are questions, answers, and more questions in Port Charles on the next GH!

Trina looks like she is about to cry as Josslyn tries to encourage her, she tells her not to give up until they know what the determination is going to be. Josslyn and Cameron Webber (William Lipton) and Spencer Cassadine (Nicholas Chavez) have been trying to find evidence on Esme Prince (Avery Kristen Pohl) that would exonerate Trina!

At Wyndemere Castle, Ava Cassadine (Maura West) comes across Nikolas Cassadine (Marcus Coloma) lost in his thoughts; she tells him he’s totally absorbed and asks if he cares to share? Nikolas looks guilty as she wants to know what he’s thinking about, and that is because he and Esme had a naked romp right before Ava and Spencer came home! They had both been looking for him and Esme and then Ava decided she wanted to reconcile right afterwards; if only he’d known that sooner! Nikolas had sworn Esme to silence and told her the sex that happened between them could never happen again, but is he worried it might or that she might tell?

General Hospital Spoilers – I Told You I’m Not Doing Drugs Any More!

Sasha Gilmore Corbin (Sofia Mattsson) and Gladys Corbin (Bonnie Burroughs) were struggling over what appeared to be an aspirin bottle when it fell to the floor and spilled it’s contents! Gladys and Sasha had just had an argument over Gladys trying too hard to keep Sasha off drugs when Brando Corbin (temporarily Brad Schmidt) came home! Gladys has been overprotective of Sasha ever since the night that the paparazzo Felty (Brian R. Norris) took photos of her and got some of her spilling drugs on the ground.

Gladys is making a face at Sasha like she’s trying to get her to shut up as she defends herself over the spilled pills on the ground! Sasha defends herself in an argumentative tone as she says she told them she’s not doing drugs anymore!

GH Spoilers – Did It Meet With Your Approval?

Damian Spinelli (Bradford Anderson) is talking to his former private investigative partner Sam McCall (Kelly Monaco) as he smiles and asks if something meets with her approval! There is a lot of speculation that Spinelli may be the creator behind the Society Setups app and perhaps set up the recent pool party. Spinelli is at every function but he never has a date, and Sam had previously asked him about his love life and he wouldn’t tell her. It sounds like if that is the subject of conversation, he’s asking about the pool party and maybe he’ll even come clean about being the app creator!

General Hospital Spoilers – Love Is All Around

At Wyndemere Castle, Esme and Nikolas walk in together as Esme smiles and proclaims “Love is all around”! Whether she’s talking about their love – which Spencer is faking and she probably is too is the question; or did they walk in on Nikolas and Ava making up and smooching? Esme is either putting on a really good act as she looks absolutely blissful and beaming, and Spencer looks pretty happy too; neither has their usual morose look on their face. Spencer will ask Esme what she thinks about continuing to live at Wyndemere, since Ava allowed for it in a previous conversation.

GH Spoilers – What Do You Got?

Carly Corinthos (Laura Wright) checks asks Sam “what do you got” as Sam checks in with an update. Sam, too has been looking for evidence against Esme in order to clear Trina of her charges, plus Carly wants to prosecute the correct person! Carly as well as Spencer, Ava, and even Port Charles Police Commissioner Jordan Ashford (Tanisha Harper) believe Trina was framed but as yet unable to prove it! The search for truth and proof of it will continue and hopefully it’ll bear some fruit before Trina has to go to trial and before she gets expelled from PCU!

General Hospital Spoilers – You Need To Take Back Your Power, Lady!

At the Metro Court pool, Britt Westbourne (Kelly Thiebaud) is still in an argument with Cody Bell (Josh Kelly) for his pulling her into the pool with his parachute! His flashing the gif that Brad Cooper (Parry Shen) made on his phone and laughing isn’t helping him score points! Britt’s gotten several calls from hospital board members who aren’t happy with their co-chief of staff being the hottest thing on the internet! Britt has been lambasting Cody who didn’t do anything but his job and she was in the way, and he claps back, telling her she needs to take back her power!