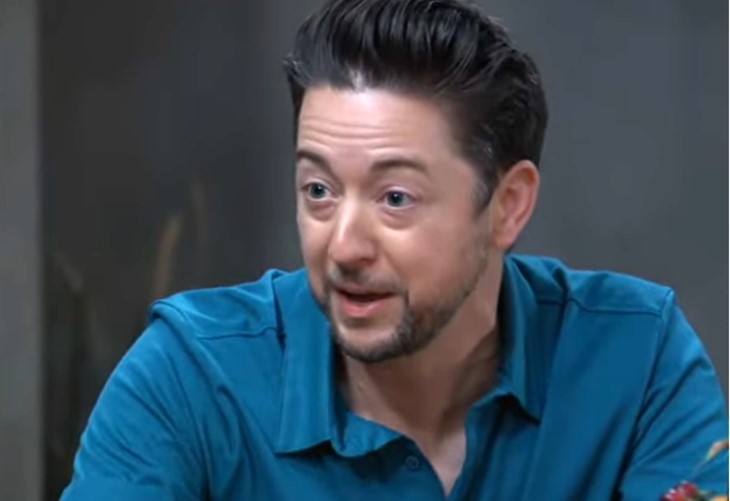 General Hospital (B&B) spoilers indicate that Damien Spinelli (Bradford Anderson) has suddenly had a change of heart about Cody Bell (Josh Kelly). Cody blackmailed Spinelli into matching him with Britt Westbourne (Kelly Thiebaud). After matching Britt and Cody, Spinelli has changed his mind. What has Spinelli learned about Cody?

General Hospital spoilers reveal that Britt is shocked by Spinelli’s sudden change. However, Britt has no idea that Spinelli is behind Society Setups. Cody used that information to get a date with Britt but what is he up to? Cody seems very interested in Cesar Faison (ex-Anders Hove). What does Cody want from Britt? Is Cody somehow tied to Faison?

Britt is shocked by Spinelli’s insistence. Britt questions Spinelli’s motives since he encouraged her to give the site another chance. Spinelli knows something but he’s not ready to spill the beans. Will Britt heed Spinelli’s warning or will she continue to see Cody? Is Cody a danger to Britt?

Spinelli is trying to talk Britt out of this date but who is he trying to protect? Is Spinelli afraid something will happen to Britt if she stays with Cody? Is Spinelli simply afraid that his part in this will be exposed? Spinelli could be opening himself up to a lawsuit for arranging this date. After all, Cody made Spinelli set him up with Britt.

Spinelli’s burning the candle at both ends and he could very easily be burned. Spinelli also doesn’t have his usual backup for protection. Will Spinelli manage to get Britt to listen to him about Cody?

Spinelli knows that Jason Morgan (ex-Steve Burton) would not be happy with his actions. Jason cared about Britt and Spinelli is letting someone use her. Is Spinelli feeling guilty or is he honestly concerned for Britt? Is Britt in danger from Cody?

Spinelli is far from being a relationship expert no matter who he is working with. What gave him the idea to set up this dating app? Why does Spinelli believe this business is a good idea? Spinelli should have never used Britt in this scheme in the first place and Jason would be furious. Can Spinelli protect Britt from Cody and whatever his plan is?

Whatever the case, Spinelli has now been overheard warning Britt which raises the stakes. Is Spinelli in over his head? Will Sonny Corinthos (Maurice Benard) have to save Spinelli and Britt since Jason is not around?