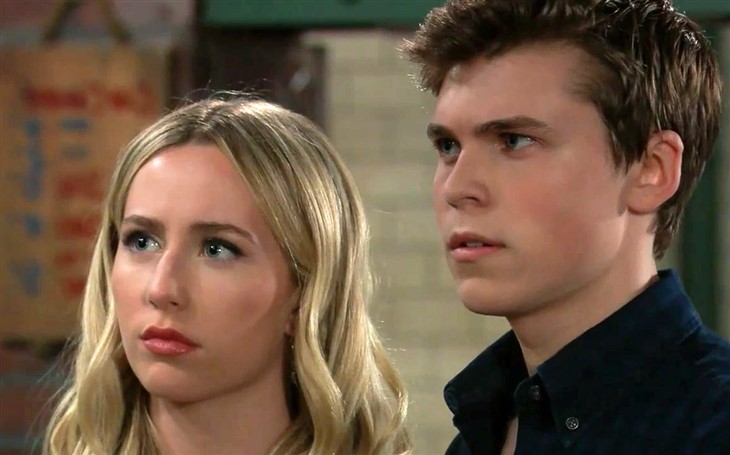 General Hospital viewers will recall that Esme Prince (Avery Kristen Pohl) had a plot in mind to get back at Trina Robinson (Sydney Mikayla) during the teens’ getaway at the Corinthos cabin. General Hospital viewers know that Esme is jealous and insecure to the max over Spencer Cassadine’s (Nicholas Chavez) friendship and increasingly deep bond with Trina, feeling very threatened by it.

Viewers will recall that she apparently also forged a prescription for opioid pain pills on Dr. Kevin Collins’ (Jon Lindstrom) prescription pad and bought a phone identical to Trina’s with a case identical to hers as well. She set the phone up to film in Cam and Joss’s bedroom at the cabin, while she spiked Trina’s hot toddy with the opioid, meaning Cam and Joss would assume Trina was down for the count and they could have privacy. Trina actually was in a drugged sleep, lucky she didn’t suffer an overdose or worse from the potentially deadly concoction, and now Esme has put the completion of her plot in motion!

General Hospital viewers will recall that Esme decided to embarrass Cam and Joss in the most public and humiliating way, possibly causing Professor Khan (Alison Martin) to think Cam uploaded it! Esme uploaded the video, with the intention to frame Trina for the crime to the computer system in Port Charles University, and as she snickered, everyone in the school including those in their class saw Joss losing her virginity to Cam!

General Hospital viewers will recall Cam and Joss were in shock, not knowing they had been filmed in the first place, and Joss’s mind goes there too, momentarily asking Cam if he did it and then she apologizes to him quickly. It wasn’t bad enough it was shown in her class, it went through the entire school, and this was right after coming from trying to correct a misunderstanding with Trina, who is upset with Joss. Of course, both Cam and Joss are embarrassed and angry, but Joss is humiliated and heartbroken as well; the memories of their first time, which was supposed to be special and private, are now public and tarnished!

As General Hospital viewers can imagine, Joss is humiliated and Cam is livid – they go through the possibilities of how this video was made in the first place and both of them come to one conclusion; Esme! They review the events of the night and realize that Esme could have planted the phone and set it to record before she stomped out of the cabin with Spencer on her heels while they were worrying about Trina, and how ill she appeared to be. General Hospital viewers know that Esme is extremely good at sneaking around unobserved, usually when others are distracted with situations that sometimes she herself creates; and they set out to confront Esme as she’s trying to sneak out of school – and of course, she accuses Trina! Trina just happens to be within earshot and she marches over and lights into Esme with an anger that Cam and Joss have never seen!

Y&R Spoilers: Courtney Hope Opens Up About Her Personal Struggles