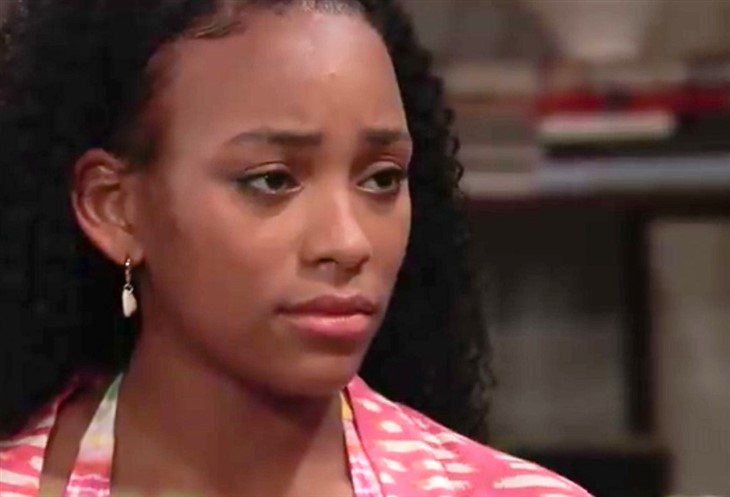 Spencer just wanted to put flowers on his late mother Courtney Matthews’ (Alicia Leigh Willis) grave, Victor wasn’t sure he could. Somehow Spencer appeared at her grave with flowers anyway only to run into a shocked Trina Robinson (Sydney Mikayla) who never thought she’d see the day, likely referring to Spencer’s sneaking out of Spring Ridge!

General Hospital viewers will also remember that Portia Robinson (Brook Kerr) and Curtis Ashford (Donnell Turner) have been looking to move in together, and Portia ask Curtis, “isn’t that a good thing?” Later, Lucy Coe (Lynn Herring) shows them a place and says she thinks that’s the perfect spot!

General Hospital viewers will remember from Friday’s General Hospital episode that Esme Prince (Avery Kristen Pohl) finally uploaded that video she took of Cam and Josslyn Jacks (Eden McCoy) in bed during the trip on the Corinthos cabin!

Esme, Cameron, and Josslyn were in a class together along with their classmates when suddenly it appeared on every student’s laptop and phone, and one sent it to the screen in front of the room; Esme snickered!

Josslyn will have a knee jerk reaction and ask Cameron if he is responsible before they figure out it’s Esme, and he is shocked as he asks her that is what she thinks he did!

Meanwhile, in Niagara Falls, Sasha Gilmore (Sofia Mattsson) is waiting for Brando Corbin’s (Johnny Wactor) answer to her proposal, suggesting they get married that day in Niagara Falls; he must not know what to say and she tells him to say yes!

General Hospital viewers know that Elizabeth Baldwin (Rebecca Herbst) was terrified to see Franco Baldwin’s (Roger Howarth) portrait he painted of her when they were dating suddenly appear on her fireplace mantel in a recent General Hospital episode.

Hamilton Finn (Michael Easton) has been staying in the Baldwin house to protect Elizabeth and her boys, but apparently now he wants to take all of them elsewhere for safety; Elizabeth declines, saying she can’t go anywhere with him, and Finn looks hurt.

At Port Charles University, Joss stops Esme dead in her tracks as she is trying to make time out of their classroom, and she asks Esme if she’s going somewhere; by the look on her face viewers can tell that Joss would like to put the emphasis on “dead!”

Back at the Metro Court, viewers will recall from Friday’s episode that as Carly Corinthos (Laura Wright) was headed for the elevator, it opened up to reveal Sonny Corinthos (Maurice Benard). Sonny was hoping to connect with Carly but she tells him it hurts to see him!

The Bold And The Beautiful (B&B) Spoilers: Distraught Brooke Turns To Deacon