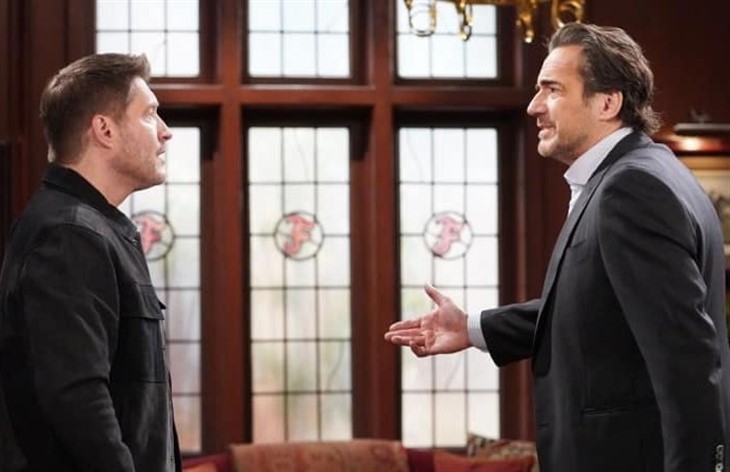 The Bold and the Beautiful (B&B) spoilers document that Ridge Forrester (Thorsten Kaye) did listen to Deacon Sharpe’s (Sean Kanan) plea. That effort, which was inspired by Hope Spencer (Annika Noelle), was heartfelt.

However, Ridge concluded what was at least a civil conversation by saying that he could not forgive Brooke Logan Forrester (Katherine Kelly Lang) because she defended Deacon. That short-sighted response implies that Ridge is what Deacon thinks, a serial rebounder.

The Bold And The Beautiful Spoilers – Deacon Sharpe Is Right

The gist of what Deacon said to Ridge is debatable but also hard to argue strenuously against. Then, Kanan’s character went to see Brooke and heaped praise on the woman he loves.

Devoted fans must wonder why Brooke leaves her front door unlocked in today’s world. Yet it was. Deacon turned the handle and walked right in. In contrast, Sheila Carter (Kimberlin Brown) encountered a locked door when she went to lambaste her renewed enemy a day earlier.

Brooke was receptive to Deacon’s comments and did not pull back when he tenderly touched her hair. Instead, she cocked her head to the side while tears were streaming down her face. It was not the last day of last year and neither was drinking, as the anti-Brooke contingent noticed.

The subject header is indisputably accurate. However, caring is not love. That term can be applied to what Brooke continues to strongly hold in her heart for Ridge.

But it appears as though Ridge will revive his relationship with Taylor Hayes (Krista Allen) if he remains unwavering in his decision not to seek reconciliation. Assuming that happens, which is still iffy at this point in the plot, means that Brooke will have the ability to rebound as well.

Is Deacon someone that Brooke would turn to on a more permanent basis? She knows that Hope would support that choice, but who else in Brooke’s life would?

The more storyline time that passes would seem to play in Taylor’s and potentially Deacon’s favor. Ridge has no reason to change his outlook if Sheila’s role in the New Year’s Eve mistake remains hidden.

But if Sheila’s tell to Thomas Forrester (Matthew Atkinson) results in Ridge learning the truth, then the slow-walk to Taylor will be seen, in retrospect, as merely a detour back to Brooke on B&B.

Jailed Josh Duggar Ignored OR Consoled By Family On 34th Birthday?! Find Out!