GH Spoilers: Scott Gets An Unexpected Call, The One Case He Won’t Take? 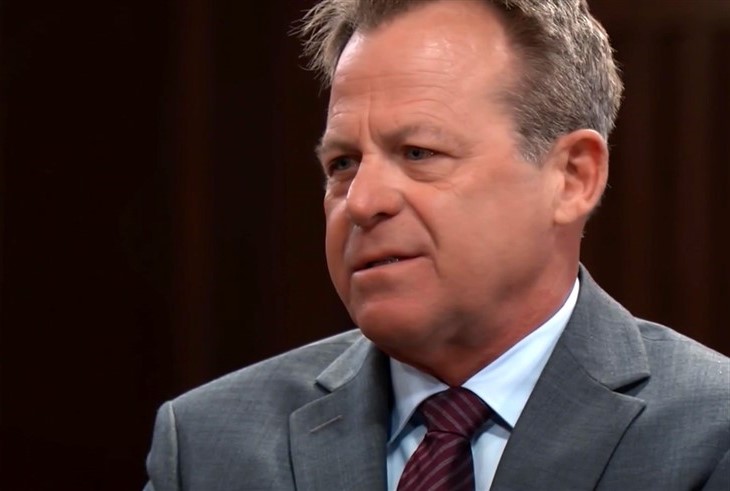 General Hospital spoilers and updates tease that Scott Baldwin (Kin Shriner) will get an unexpected call, and it’ll be for the one case he won’t take. Heather Webber (Alley Mills) is being questioned by the police, and she wants him to defend her.

Scotty goes to the PCPD where he finds Detective Dante Falconeri (Dominic Zamprogna) has had Heather brought back from D’Archam Asylum for questioning. Someone had sent a false lead on Anna Devane’s (Finola Hughes) location, and it’s suspected to have been sent from a burner phone but preprogrammed to send later. They think Heather did something with Anna and either buried her or hid her body somewhere when they were on the run after the transport crash.

Dante had picked up Heather himself at Kelly’s after Cameron Webber (William Lipton) called him, but Heather had a hoodie on over her prison jumpsuit she didn’t have previously. She’d also managed to get herself out of her shackles and handcuffs and was sitting there eating a BLT and fries, but no phone on her then.

Scotty tells her flat out he won’t take her case because he won’t work for free and especially not for her. But he does say they can’t prove she did it and can’t prove they didn’t. They may not have a case at all, at least not a provable one, and Dante isn’t in the loop about what’s going on with Anna behind the scenes. Not even Mac Scorpio (John J. York) was in on that, with his brother Robert Scorpio (Tristan Rogers) and Mayor Laura Collins (Genie Francis) tricking Holly Sutton (Emma Samms). Laura had sent the fake address to Robert, Holly took the bait and sent it to US Marshall Whitten (Mike Peebler) who’d stormed the empty house with SWAT, Mac, and Dante.

General Hospital Spoilers – They Send Her Back

Laura and Robert’s reason was what Mac and Dante don’t know can’t get them hurt, being positive Whitten’s working for Victor Cassadine (Charles Shaughnessy). In the meanwhile, Dante couldn’t get Heather to confess anything and Scott is right, they can’t hold her for arraignment because they have nothing on her. Heather’s off the hook for suspicions of making Anna disappear because all they have is that text and they can’t prove she sent it.

Dante has her taken back to D’Archam and he and Mac will have to start from scratch, and they don’t believe Anna’s guilty either. Whitten can take it from there and do a deeper search around the site of the transport crash on his dime.

Days Of Our Lives Spoilers: Who Is Susan Banks? DOOL Character Explained

Days of Our Lives Spoilers: It’s Not A Good Day For Nicole Walker