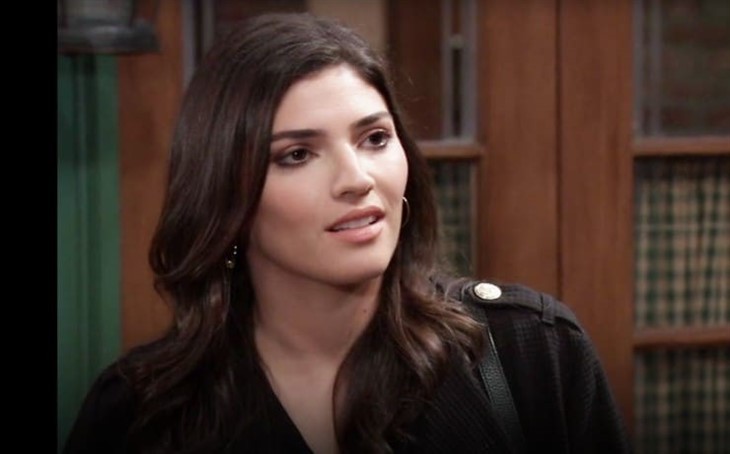 Brook Lynn delivers a threat, make that a promise, to Linc Brown (Dan Buran) who she’s been trying to take down, working with Harrison Chase (Josh Swickard). She’s deadly serious as she eyeballs the sleazy ex-manager of hers and tells him she’s going to expose him for the creep he is. Linc had sexually harassed Brook Lynn during the time he had managed her career, plus co-opted all the rights to the songs she wrote during that time.

She thinks she’s got the slimy worm by the tail as she confronts him, but does she really? It’s kind of hard to prove anything when she’s acting like a cop without a warrant.

In the meantime, Chase is sitting at Kelly’s with his new singing partner Blaze (Jacqueline Grace Lopez), a collaboration created by Linc. Linc is still managing Blaze, but Chase’s cop instincts tell him she’s operating under harassment as well. Chase talks to her and asks what direction she wants to take this, presumably referring to a future performance. Chase is still undercover without being a cop and with no warrant, but maybe he and Brook Lynn can help this girl if she’s honest and turns Linc in.

Sam McCall (Kelly Monaco) confides in her mother, Alexis Davis (Nancy Lee Grahn) and wants her to confide in her. She tells her she needs to know what happened, and she may be talking about the letter to the editor from “The Hook”. Alexis was a bit freaked out when she received the letter at her office at “The Invader” but she asked for it.

Alexis had the idea to draw out “The Hook” Jack the Ripper style, the way an editor of an 1880s newspaper did. Jack wrote a lot of letters but his slashing crimes only increased, and he was never identified. Port Charles Police Commissioner Jordan Ashford (Tanisha Harper) took the letter and told her to dial it down, but Alexis kept a copy.

At the Metro Court, it looks like Dante Falconeri (Dominic Zamprogna) lets some information slip in front of Nina Reeves (Cynthia Watros). That’s a bad move, as quite a few people in Port Charles have found out; but it sounds like he’s talking about Esmé Prince (Avery Kristen Pohl) being spotted. That might be more of a public service announcement; Nina asks him how worried Ava Cassadine (Maura West) should be. Ava definitely is someone that could be in danger from Esmé, especially she she’s suspected, but not proven, of being The Hook.

Cody might continue to lie about one thing, that is, being the son of Leopold Taub (Chip Lucia) in order to get his hands on that necklace. However, he’s telling the truth when he tells a devastated Britt Westbourne (Kelly Thiebaud) that she’s definitely worth being loved. It’s questionable if he’s telling her that because he loves her or if he loves that shiny necklace he probably sees on the floor.

Cody wants the necklace but he might not get the chance, since Robert Scorpio (Tristan Rogers) and Victor both know about it. In fact, that might be Robert on the way right now, flanked by a guard.

GH Spoilers – He’s Onto Her

Robert’s onto Holly Sutton (Emma Samms) and he got her to spill that Victor’s forcing her to work for him because he has her son. Ethan Lovett (Nathan Parsons) had continued to look for her in Monte Carlo, believing he found evidence of her survival, but was captured. Robert might also know about the necklace with the four diamonds from the Ice Princess, Scott Baldwin (Kin Shriner) may have called him after warning Cody to run for the hills. Robert and a guard come through a door that could be of Britt’s office at GH, saying, “And..?”

Robert may indeed be a few steps ahead of Victor and Holly, as Victor is just assigning Holly her new task at the docks. She’ll be told to get the Ice Princess necklace which his spy has told him Robert will have in a briefcase chained to his wrist. It is true Victor has spies and plants everywhere, from City Hall to General Hospital, but she seems hesitant to obey.

Victor reminds Holly that she should trust him, because she’s got a lot more to lose. She already lost her sister Paloma Perez (Emma Samms) who he shot to death in front of her, and now he has Ethan.