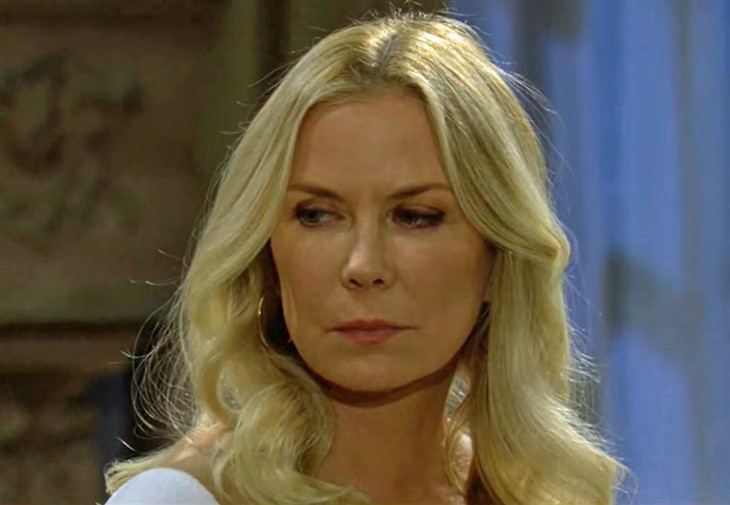 The Bold and the Beautiful spoilers document that Brooke Logan Forrester (Katherine Kelly Lang) had no choice. Ridge Forrester (Thorsten Kaye) decided that their marriage was over, as Sheila Carter (Kimberlin Brown) gleefully discussed with Taylor Hayes (Krista Allen) during another unscheduled visit to the doctor’s office.

Sheila told Taylor that she was on her team. Sheila wanted the long-teased reunion with Ridge to happen. But how can she also support Deacon Sharpe’s (Sean Kanan) desire to explore a relationship with his daughter’s mother?

Taylor has dual modes of knowing that Sheila is not being forthright. First, Allen’s character is a trained psychiatrist. Second, she is painfully aware of Sheila’s terrible backstory.

Sheila takes too much pleasure in Brooke’s pain. Taylor, on the other hand, was not pushing for an end to Ridge’s marriage. As Sheila said, Taylor took the high road and did not engineer anything.

But Brown’s character needs to be careful. Her joy in Brooke’s downfall could lead to her revealing information that enables Taylor or other connected characters to learn why Lang’s character had that urge to drink on New Year’s Eve.

The progress Sheila made with John Finn Finnegan (Tanner Novlan) was due to Taylor encouraging Steffy Forrester Finnegan (Jacqueline MacInnes Wood) to allow Finn’s mother to be with them on Christmas Eve at the cliff house. Sheila was surprised that Taylor made that call and has come to think of Allen’s character as a fellow grandmother friend.

But rather than trying to live honestly and be a good role model for their grandson, Hayes Forrester Finnegan (Samantha Worden and Piper Harriet), Sheila is becoming a troublesome pest.

Taylor does have sympathy for Sheila. But she is not sure Sheila can be trusted and has been open about needing to see evidence of long-term growth.

The Bold And The Beautiful Spoilers – Deacon Sharpe Encouraged To Pursue Love?

Sheila can not claim to be Deacon’s friend while also wanting Brooke to crash. Deacon heard Sheila say she was jealous of the progress he was making in establishing a relationship with Hope Spencer (Annika Noelle).

Fans must also be wondering how Deacon will react if Sheila ever tells him about supplying Brooke with alcohol. That could happen if Deacon rubs Sheila the wrong way, or he inadvertently learns the reason why Brooke was drunk when he returned to get his smartphone at the mansion.

Meghan Markle May Not Win Any Awards, But Duchess’ Dress From Did!