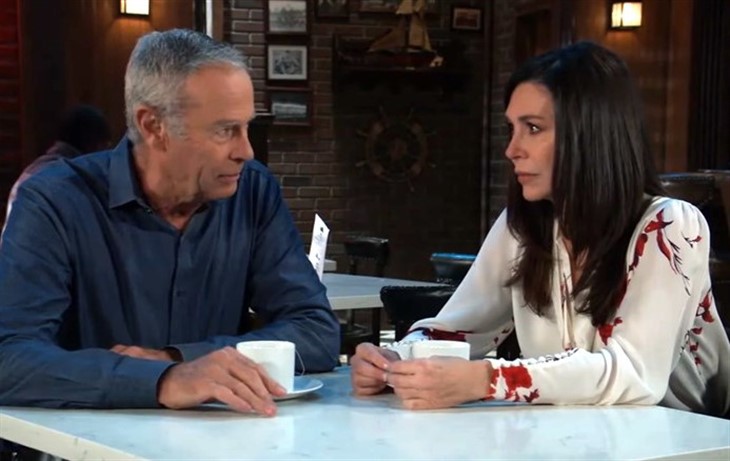 General Hospital Spoilers – Could There Be A Clue In Anna Devane’s Conversation With Robert Scorpio?

General Hospital viewers will remember when Robert told Anna about the sad news of their friend of many years, Luke’s death as the result of a cable car accident in Austria, the car having fallen from its cabling. The former husband and wife spy team spent several minutes in sad silence, likely thinking about how many old friends they had lost in the past years, including Sean Donely (John Reilly) although he wasn’t mentioned in this particular scene.

Longtime General Hospital viewers will recall that back in their younger days, Robert and Luke had been romantic rivals over Holly, and Robert won in that contest although Ethan Sutton (Nathan Parsons) turned out to be Luke’s son instead of Robert’s. It was natural to leave Sean out of their conversation, therefore, as Anna took Robert’s hand and sadly said, “first Holly, then Luke”; but could that be a clue of things to come?

General Hospital viewers know that Holly isn’t dead – there was a scene shown of her being held captive in a nicely appointed bedroom after Ethan, Robert, and Olivia Quartermaine (Lisa LoCicero) left Monaco after their search. Since that time, General Hospital viewers noted the room Holly had been held captive in was quite similar to that which Liesl Obrecht (Kathleen Gati) was held in at first when Victor Cassadine (Charles Shaughnessy) had kidnapped her!

Drew Cain (Cameron Mathison) was also found alive and talked about a female prisoner that he was concerned about to Anna when they got back from Cassadine Island, and both his and Holly’s “deaths” were quite similar. They were both in planes that were said to have crashed but no trace of either crash was ever found; there is a good possibility that the cable car crash that presumably killed Luke was not real as well!

General Hospital viewers know that Victor was behind Luke’s presumed death as well as Holly’s and Drew’s, because he was on the phone with someone in a recent General Hospital episode where he said Luke had been “neutralized.” Even though in spy circles and military jargon the word “neutralized” can mean “assassinated” or killed, it can simply mean “disabled” or “thwarted” as well, and Victor also said the hit on Laura Collins (Genie Francis) could be cancelled.

This seems to hint that Victor had perhaps hoped to draw out Luke because of the danger to Laura, but it could also hint that his second phase he mentioned is tied to revenge on Luke from years ago. Victor could also have just wanted Luke out of the way to keep him from intervening in his second phase which remains to be revealed, possibly having something to do with his wanting still to control Drew!

B&B Spoilers: Sheila Puts Herself At Risk – Deacon Drawn Back To Trouble