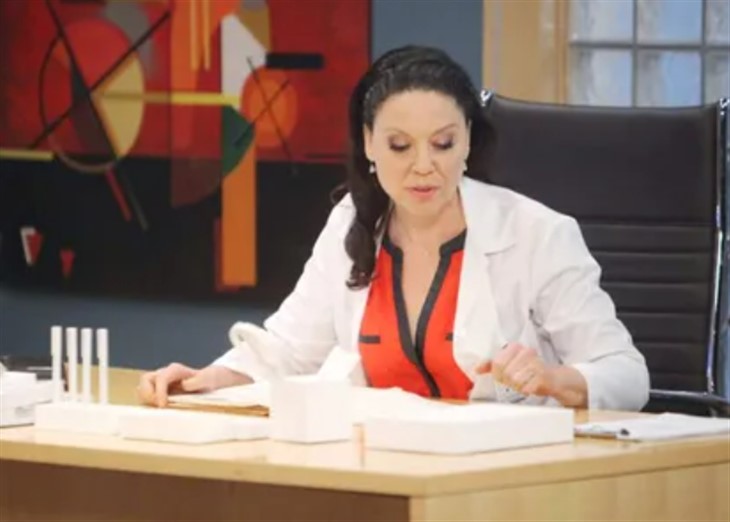 General Hospital (GH) spoilers reveal that there is going to be some major drama at the upcoming double wedding in Port Charles, NY. We know that Peter August (Wes Ramsey) is getting ready to crash and burn. The head writers discussed the storyline, which includes Liesl Obrecht  possibly stopping the nuptials. It was stated that Liesl will not fail her son. She’s keeping that promise.

GH spoilers reveal that Peter and Maxie Jones (Kirsten Storms) are getting ready to walk down the aisle. They are having a double wedding with Dr. Hamilton Finn (Michael Easton) and Anna Devane (Finola Hughes). It has already been confirmed that the double wedding will end with massive explosions and bombshell revelations.

As Peter’s luck starts to run out and exposure is inevitable, fans are wondering what exactly is going to happen at the double wedding. What we do know is that the head writers spoke to Soap Opera Digest about the storyline. Dan O’Connor confirmed that Anna really is torn and will be forced to make a choice.

“Anna hopes that the situation will resolve itself before she walks down that aisle. However, she may be forced to choose between the world of espionage and secrets and lies that she works in and the path of honesty with the man she intends to marry.”

General Hospital spoilers reveal that this week, Liesl goes searching for evidence, which we saw during a recent episode. The head writers teased that the biggest bombshell will be what’s written in Alex Marick’s (also portrayed by Finola Hughes) last will and testament. Meanwhile, Maxie is getting impatient because Peter is late. When she walks into the apartment, she doesn’t find her fiance there and demands to know where he is. The drama and suspense are continuing to build up until we get to the explosive wedding reveal.

The co-head writer was asked if Liesl will be the one to stop the wedding. He couldn’t give a solid answer to that without spoiling anything. However, he did talk about Liesl’s promise to Nathan West (Ryan Paevey.) She made a promise to her son to always protect Maxie. Failing Nathan simply isn’t an option.

“I think Obrecht believes she made a solid promise to Nathan that Maxie will always be protected. And if that wedding goes off without a hitch, she will have failed her son.”

What do you think is going to happen at the double wedding? What will Anna do when she is forced to make a choice? How exactly is everything going to blow up at the upcoming ceremony? We will have to keep watching the long-running ABC soap to find out what happens next.