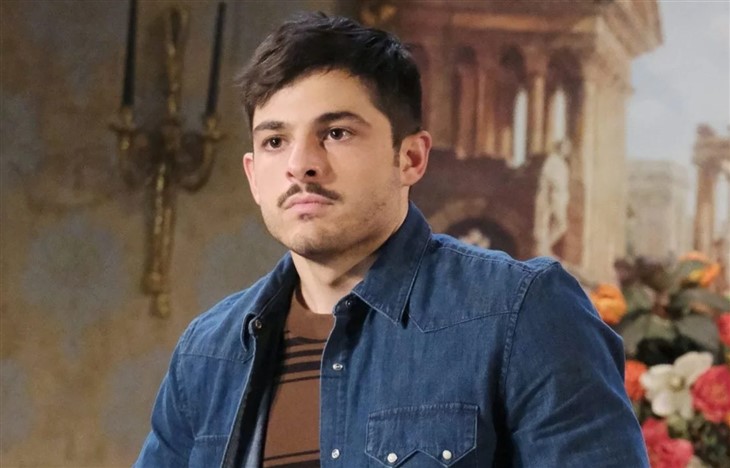 Days of Our Lives spoilers and updates tease Will Horton (Chandler Massey) will deliver some disappointing news to Sonny Kiriakis (Zach Tinker). Although Will has come back to Salem for the time being, to support the maternal side of his family, will he again move back to Arizona?

Days Of Our Lives Spoilers – Will Horton Gets The Wrong Idea

Will gets the wrong idea right from the start when he comes to Salem to find Sonny’s let Leo Stark (Greg Rikaart) move into the mansion and gave him a job. Will cannot understand why Sonny would do such a thing, after all the trouble Leo made for them, and especially after trying to kill him with poisoned cookies! Sonny is obviously being much too forgiving, and he needs to stop and think what he has done; Leo blackmailed Sonny into marrying him, keeping Will and Sonny apart.

Will has no compassion for the smarmy snake whatsoever, and he wonders if Sonny has lost his mind, or worse yet, his heart. He certainly doesn’t want his daughter Arianna Horton (Sydney Brower) being anywhere near Leo Stark-Leo has never been anything but trouble for them, and he questions Sonny what has changed?

DOOL Spoilers – Why Does Sonny Kiriakis Feel Sorry For Him?

Why does Sonny feel sorry for Leo, he owes him nothing – he was even suspected of murdering Abigail DiMera (Marci Miller) and brought in two times. In the end, it had turned out to be Clyde Weston (James Read) but Leo wasn’t entirely without fault; he robbed Abigail’s jewelry afterwards and had been in the DiMera mansion. He had been lurking in the wine cellar using it for an apartment and pretended to be the tooth fairy when Thomas DiMera (Cary Christopher) discovered him.

According to Days of Our Lives spoilers, Leo had even had a hit list to get revenge on for breaking up his wedding, and Sonny and Abigail had both been on it-Will simply doesn’t get it.

Days Of Our Lives Spoilers – A Rift Between The Two?

After Will and Sonny endured so much to finally be together as husband and husband, it would seem that time, space, and Leo has put a rift between the two. Sonny doesn’t understand why Will can’t-or won’t-move back to Salem and go back to working for the Salem Spectator, he’s certainly needed there; he’d be hired back in a heartbeat. As for Will, he realizes Sonny’s father and other family are in Salem, but why won’t he move back to Arizona; the company Will works for could use him there.

Arianna has been fine with spending time with her Hernandez family members part time and Horton family in Salem and the rest of the time in Arizona. Sonny is more than disappointed when Will tells him he won’t relocate back to Salem and he’s going back to Arizona.