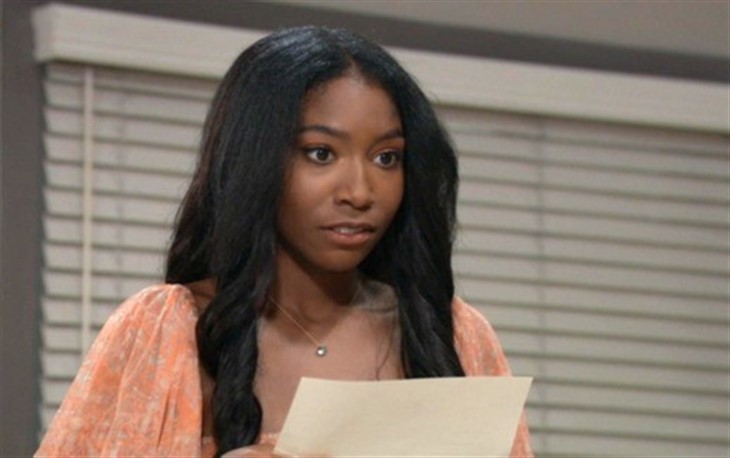 General Hospital (GH) spoilers and updates for Monday, October 3 tease there will be conflicts among some, favors repaid by others and questions by still others in Port Charles. Trina Robinson (Tabyana Ali) comes into conflict with Josslyn Jacks, (Eden McCoy) Spencer Cassadine (Nicholas Chavez) asks to repay a favor and Dante Falconeri (Dominic Zamprogna) has questions.

Sasha Gilmore (Sofia Mattsson) seems ashamed as she talks to Maxie Jones (Kirsten Storms) by Nina Reeves’ (Cynthia Watros) office. Maxie is helping set up Brando Corbin’s (Johnny Wactor) funeral and Nina paid for it when Sasha’s bank wouldn’t honor her bank card. Sasha is obviously between a rock and a hard place since Brando was her guardian and another has not been chosen, so her money’s tied up.

Sasha’s in a bind since she can’t pay for her husband’s funeral expenses and her attorney, Diane Miller (Carolyn Hennesy) was attacked by the Port Charles Hook. Diane was in Brando’s garage getting her guardianship paperwork at the time to request a court continuance, but Sasha need not worry, Maxie will no doubt reassure her it’s all good.

Trina and Josslyn may be having some girl talk, but Trina is frustrated and upset and they get into conflict. Trina is frustrated as she asks Joss why she is so interested in that guy, no doubt meaning Dex Heller (Evan Hofer). Dex seems to have dropped off the face of the earth, and Josslyn is probably worried the Port Charles Hook got him. Truth be told, her ex-stepfather Sonny Corinthos (Maurice Benard) has him, trying to get him to admit to being The Port Charles Hook and a little tied up right now. Dex is probably pretty cold by now too, considering he’s in the freezer at Pozzulo’s and had water splashed on him.

At the hospital, Elizabeth Baldwin (Rebecca Herbst) is talking to Dr. Hamilton Finn (Michael Easton) about connections. She might be talking about her memories of seeing Reiko Finn (Mele Ihara) at the bottom of a staircase and seeing Peter August (Wes Ramsey). Elizabeth is probably not telling him she knows who she struggled with years ago and that she saw the same face in her memory before she saw Reiko on his phone. She hasn’t remembered the face of the man at the top of the staircase yet, whether it’s Finn or her father, but she did remember grabbing Reiko’s arm. She tells Finn it’s not the kind of connection that really ever goes away, but she knows the incident with Peter triggered her repressed memory.

Spencer got in trouble with someone in the Pentonville Prison library and was knocked out by a book to his head. It sounds like someone intervenes and he receives unexpected aid. Spencer tells this person he did him a solid and wants to know what he wants for it.

If it’s one thing Spencer needs in Pentonville, it’s a friend, and he wants to repay the favor. But Spencer greatly underestimates what kind of repayment this other inmate might want, and this guy may not be a friend the way he assumes.

Still in Jacksonville, Florida, Drew Cain (Cameron Mathison) has a question for Carly Corinthos (Laura Wright). He had come up with a plan to defeat the Jacksonville Beautification League by giving them some really bad press through Aurora Media. This is likely what Drew is asking Carly if she might have a problem with it, although bad press never hurt when dealing with someone like Peyton Honeycutt (Linda Purl). They are trying to prevent the cemetery where Carly’s adoptive mother, Virginia Benson (Lois Nettleton) is buried from becoming access to the beach.

Dante has questions for Sonny, and they don’t seem to be son to father type questions, but official ones as a detective with the Port Charles Police Department. Dante gets right to the very blunt point when he asks Sonny where his employee Dex is. Dante has had some questions for Dex as well, since he was at the scene of all three attacks of The Port Charles Hook.

Sonny remains resistant to answering, undoubtedly since he has him tied to a freezer rack in the freezer room of Pozzulo’s Restaurant. He already told Michael Corinthos (Chad Duell) to stay out of it because where Dex is was none of his business.

Elsewhere, former WSB agent and Port Charles District Attorney Robert Scorpio (Tristan Rogers) has a wish. He tells someone he wishes he could find this guy, meaning the Port Charles Hook, before he does it again. But soon he’ll find out that this guy isn’t a girl, when Diane wakes up and remembers her attacker was a woman. On the other hand, there could be two of them, considering the attacker who killed Brando appeared to be a much taller and stronger person. That might mean double danger for the citizens of Port Charles in the coming weeks.

Days of Our Lives Spoilers: Jennifer Realizes She Mowed Down Gwen