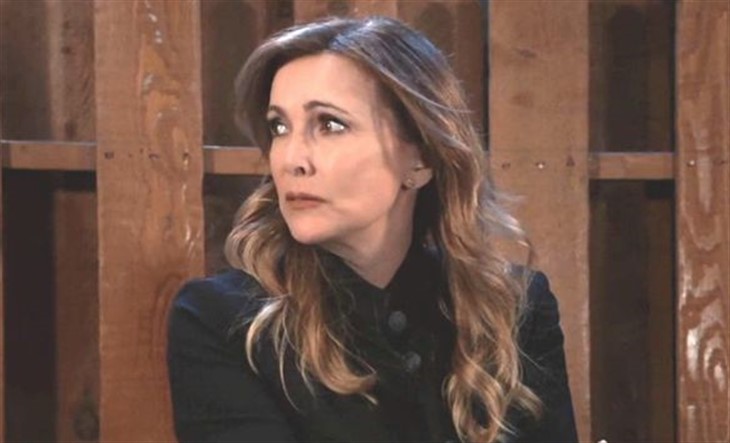 Robert Scorpio (Tristan Rogers) is out of it after a shocking betrayal by a former betrothed, when Holly’s tequila shots packed a bit too much of a punch. Robert came back from his room stumbling like a drunkard, minus the briefcase he had cuffed to his wrist. Now Holly has the Ice Princess necklace which she must intend to turn over to Victor Cassadine (Charles Shaughnessy) in spite of her desperate confession to Robert.

Robert’s in a bed at GH waiting to be examined when he tells Diane Miller (Carolyn Hennesy) to get Ashford over there now. PCPD Jordan Ashford (Tanisha Harper) needs to get a squad together to hunt down Holly and the necklace ASAP!

Jordan has arrived at General Hospital as her son Dr. TJ Ashford (Tajh Bellow) gets ready to examine Robert, and asks her what she thinks. She says the DA has been drugged, although they will need lab tests to verify it for his treatment as well as for evidence. A team will be assembled to go after Holly, and Jordan, Chief of Detectives Mac Scorpio (John J. York) and Robert will go after her, insisting on going as well. Robert has to be wondering if Holly’s desperate confession about Victor killing her sister and holding her son, Ethan Lovett (Nathan Parsons) was even true.

Holly runs into Laura Collins (Genie Francis) quite unexpectedly and Laura won’t take no for an answer. Holly looks terse with teeth clenched as she debates her next move, which turns out to be a desperate one. Soon, Laura will find herself on the other end of a gun as Holly takes her hostage, and Laura will likely try to talk Holly down.

Holly may be so traumatized after seeing her sister Paloma Perez (Emma Samms) murdered in front of her by the Cassadine – if her story is true –that she isn’t acting. Perhaps she’s learned better than to underestimate Victor and he may really have Ethan.

At Wyndemere, Victor shows up and talks to Nikolas Cassadine (Marcus Coloma) saying he knows exactly what’s going on. However, not even Victor is infallible and he might be jumping to a wrong conclusion. He may suspect that Nikolas has Esmé captive somewhere or perhaps that he killed her, as seems to be a failsafe for true Cassadines. But Nikolas has done everything and said everything to keep the Cassadine patriarch from moving in, and Victor knows there’s a reason.

There’s a knock on the door of Esmé’s north tower room, but it’s not Avon calling, it’s Elizabeth Baldwin (Rebecca Herbst). She explains that she’s there to help but Esmé will be resistant to the help she’s there to give, bearing gifts of prenatal vitamins. Esmé should know from her last experience that she can’t fool Elizabeth with manipulative stunts – she knew just what to do when Esmé pretend passed out.

Esmé will try other tactics since she doesn’t want to have a caesarian section with no anesthesia. There’s only so much she can do when she’s dealing with Elizabeth, a former conniving teenager herself.

Ava’s at the Metro Court with her signature martini in hand, and has received a surprising summons. It’s not the kind of summons that wants her in court, but she is wanted to help the Port Charles Police Department with something. She’s doubly intrigued when both Kevin Collins (Jon Lindstrom) and Mac Scorpio (John J. York) ask for her help, but it’s not what she might have expected. She’s pretty pleased with the prospect of helping the PCPD instead of being suspected by them until she finds out what they want. They want her to help them catch Esmé!

General Hospital Spoilers – BLT With A Side Of Blackmail

Dante Falconeri (Dominic Zamprogna) gets a different assignment as he visits Heather Webber (Alley Mills) at D’Archam Asylum on official business. She’s in the middle of an artistic endeavor and she looks quite annoyed at being interrupted. Dante probably asks her if she remembers anything or knows anything about where Anna Devane (Finola Hughes) went the night of the prison transport crash.

The driver was missing, which had been Dex Heller (Evan Hofer) who helped Anna get to Valentin Cassadine’s (James Patrick Stuart) waiting car and the D’Archam guard was passed out. Heather will tell him everything but only for a price, which could be a BLT from Kelly’s.

Back at Wyndemere, Esmé ramps up her deceptive pleas and whines like a puppy who’s being abused. She pleads with Elizabeth, that she has to let her go, after all, it’s not right that Nikolas continue to keep her captive there. She’ll be sadly disappointed that Elizabeth isn’t falling for her guilt trips either, because she’s on Nikolas’ side.

She knows Esmé is dangerous and possibly even the Port Charles Hook, but she’s agreed to provide prenatal care to Esmé until the baby is born. After that, who knows what might happen?