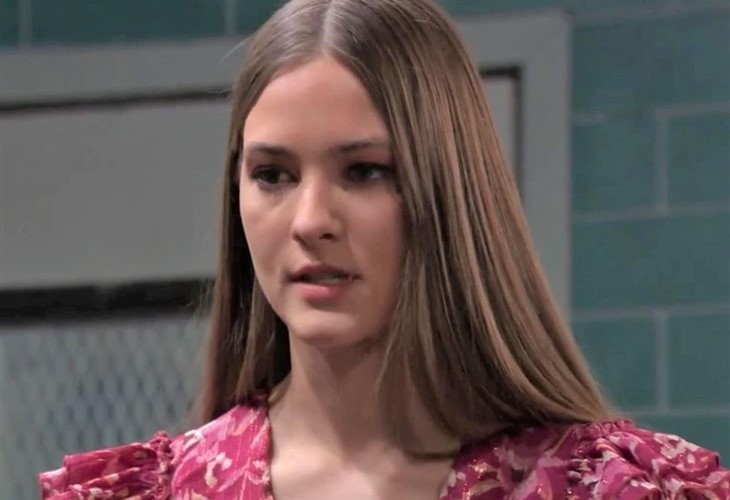 General Hospital Spoilers – Harmony Miller Has Something Under Consideration

General Hospital viewers will recall that Harmony has had a couple of situations to consider in the past few episodes of General Hospital. For one, she needs a place to live, which she confided in Alexis Davis (Nancy Lee Grahn) recently, and Nina Reeves (Cynthia Watros) asked her to help with getting visitation with their mutual grandson Wiley Corinthos (Viron Weaver). She tells someone “it’s under consideration”, but it sounds more like she may be referring to something Alexis is suggesting.

Back at Charlie’s Pub, Curtis Ashford (Donnell Turner) listens to Marshall’s explanation after he wanted to know why Curtis was talking to Sonny Corinthos (Maurice Benard); viewers will remember that Marshall doesn’t trust Sonny! Marshall tells Curtis, who looks skeptical, that he just doesn’t want him calling in his debts, seemingly referring to Sonny; it sounds like he’s talking about owing money but it could be owing mob hits or who knows what!

General Hospital viewers next see Jordan questioning Trina Robinson (Tabyana Ali) about the allegations Esme called into the PCPD tipline, asking her if she is comfortable answering a few questions, but viewers know she’ll soon be pretty uncomfortable. General Hospital viewers will recall from Friday’s episode that Jordan had shown up at Port Charles University, asking Trina to come down to the station; and apparently Joss followed her over there as she’s trying to help her friend.

Joss is talking to Detective Dante Falconeri (Dominic Zamprogna) and tells him the person he and the PCPD should be talking to is Spencer Cassadine’s (Nicholas Chavez) psycho girlfriend, and viewers know that Joss is right! Trina will undoubtedly face some difficult challenges soon but eventually the true perpetrator will be confirmed, but in the meantime Esme will continue to manipulate as only she knows how! Esme is truly her father’s daughter, every bit as cunning and manipulative as her birth father, who as viewers know is Ryan Chamberlain (Jon Lindstrom)!

At the Metro Court, General Hospital viewers will see Esme continue to manipulate Nikolas Cassadine; (Marcus Coloma); she stopped short of telling Nikolas that she might be pregnant, but she cried she couldn’t pay for a room and asked if she could move into Wyndemere! General Hospital viewers see Esme is continuing her sob story, hoping to get Nikolas’ sympathy and help – she cries as she asks him if he’s turned his back on her too?

Elsewhere at the Metro Court, Scott Baldwin (Kin Shriner) is talking to Nina about her visitation challenge regarding her grandson Wiley. He asks for verification if she wants to go down the legal road – it sounds like Nina is out of other options other than to take it to court, considering all other avenues have led to dead ends!

B&B Spoilers: Brooke Refuses To Give Up