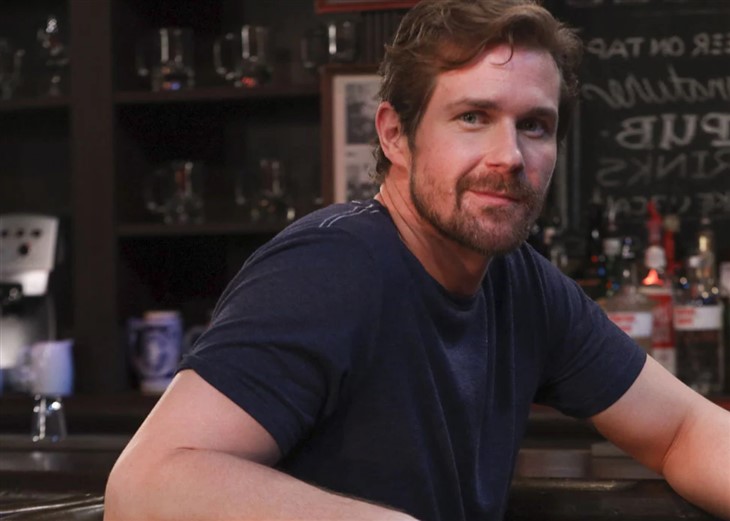 General Hospital spoilers and updates for Monday, July 11 tease many in Port Charles will be involved hin or victims of plots and schemes on the next GH!

General Hospital Spoilers – Why Would I Leave When I’ve Met My Match?

Society Setups matched Cody Bell (Josh Kelly) with Britt Westbourne (Kelly Thiebaud) as perfect matches, much to his excitement and her chagrin; he approaches her at the Metro Court pool. Cowboy Cody is definitely not Britt’s cup of tea, and she wasn’t about to set up anything with him, yet there she is, and there he is! Cody asks her why would he leave when he’s met his match, as Britt is obviously vexed and in vehement disagreement!

Cody is one determined cowboy and he’s very interested in this particular filly! Question is, will he have to lasso this lovely lady and if he does, will she turn into a bucking bronco?

GH Spoilers – This Is Your Chance To Escape The Gravity Law

Trina Robinson’s (Tabyana Ali) trial is coming up and she, Josslyn Jacks (Eden McCoy) and Officer Rory Cabrera (Michael Blake Kruse) discuss her case at the Metro Court pool. Josslyn tells Trina this is her chance to escape the gravity law – just because she’s coming up for trial, it doesn’t mean she’s has to go down guilty!  Trina has one option and will need to decide to use it or not – her only alibi is having seen Spencer Cassadine (Nicholas Chavez) visiting his mother’s grave. Trina saw him there at the same time Esmé Prince (Avery Kristen Pohl) was uploading the revenge porn to the internet from the phone she later planted in Trina’s purse. Trina has been hesitant because Spencer was not supposed to be there and could get his parole and probation revoked, having had a special trip arranged by Victor Cassadine (Charles Shaughnessy).

General Hospital Spoilers – Why Would You Say Something Like That?

Maxie Jones (Kirsten Storms) is at the park where she and Austin Gatlin-Holt (Roger Howarth) were supposed to be having a picnic when Damian Spinelli (Bradford Anderson) shows up! Previous GH episodes revealed that Spinelli has apparently gotten in over his head in relation to Society Setups and the matchmaker, Zelda Telesco (Kristin Carey). Everyone who knows Spinelli can tell he’s been acting strange, not dressing like himself; Maxie picks up on something when she asks him why he would say something like that!

Maxie knows Spinelli just about better than anyone else, having been involved romantically with him in the past. Spinelli is also the father of her oldest daughter Georgie Spinelli (Lily Fisher) and she knows there’s something wrong!

GH Spoilers – You Need To Live Up To Your End

Maxie and Austin’s romantic Fourth of July picnic has had crashers, Spinelli one, Britt the other, and now he has to deal with yet another interruption! Previous General Hospital episodes revealed that someone has been observing Maxie and him, and he told the as yet unknown person to stay away from her!  Now he’s on the phone telling presumably that same person that he or she needs to hold up their end of the bargain! It sounds like this unknown person who was observing them up at the campground near Pautauk has now followed them to Port Charles!

General Hospital Spoilers – Which Is Reason Number Two To Skip It

Spencer is talking to Esmé who has a big smile on her face, and telling her something is reason number two to skip it! Spencer may be talking to her about skipping some big Fourth of July festivities, trying to keep her from making any more trouble for Trina than she already has. Esmé would like nothing more than to make even more trouble for Trina ahead of her trial, and she knows the rest of the gang are celebrating together.

Spencer also wants to make sure that Esmé doesn’t have a clue that the line of bull he’s going to shoot her about having found her birth mother is exactly that! His grand plan is coming together, he just needs her to believe that DNA test with Joss and Carly Corinthos’ (Laura Wright) DNA is legit!

GH Spoilers – I Need Something To Change That

Valentin Cassadine (James Patrick Stuart) approaches Nina Reeves (Cynthia Watros) in her office at Crimson Magazine. He needs a favor and says he needs something to change that, possibly talking about Charlotte Cassadine’s (Amelie McClain) custody should something happen to him. He had told his father Victor that he failed to assassinate Mayor Laura Collins (Genie Francis) and was told failure is not an option! However, Nina’s reaction will surprise him and may not be what he wants to hear!

General Hospital Spoilers – I’m Glad I Ran Into You

Spencer will be confronted by Sonny Corinthos (Maurice Benard) who will be glad he ran into him. Sonny is Spencer’s maternal uncle, being the older brother of his late mother Courtney Matthews (Alicia Leigh Willis). Sonny will help Spencer realize something, and it may have to do with how he’s been handling things with his family, his stepmother, and his girlfriend.

Sonny also knows a rat when he smells one, and he’s smelled Esmé from miles away the first time she lied to him about  Avery Corinthos-Jerome (Ava and Grace Scarola)! Esmé had relayed old information about Nikolas and Ava Cassadine (Marcus Coloma, Maura West) taking Avery overseas for her own safety!

GH Spoilers – It’s My Only Option

Carly is still stressing and fretting over her mistake with investing too much in Aurora Media when it wasn’t such a sure thing! She’s nearly bound to lose her half of The Metro Court if she can’t come up with cash to redeem it within thirty days, and she has nowhere to go! She is stressing out to someone, saying it’s her only option, perhaps thinking twice about turning down Sonny and the Quartermaines. Someone else will offer to buy her half, but she’s not going to like it and she has no choice!

General Hospital Spoilers – There’s Something You Should Know

Willow Tait (Katelyn MacMullen) and Michael Corinthos (Chad Duell) will get derailed in their plans, and this might be why Willow says there’s something someone should know! Willow and Michael are ecstatically happy over the thought that she’s pregnant, but all the tests had not come in that were performed when she passed out!  Willow, however seems calm and confident as she’s giving this news, so it may not be about the medical tests.

It’s more likely that they’re making the pregnancy announcement to the rest of the Quartermaines. She could also be telling others at General Hospital.