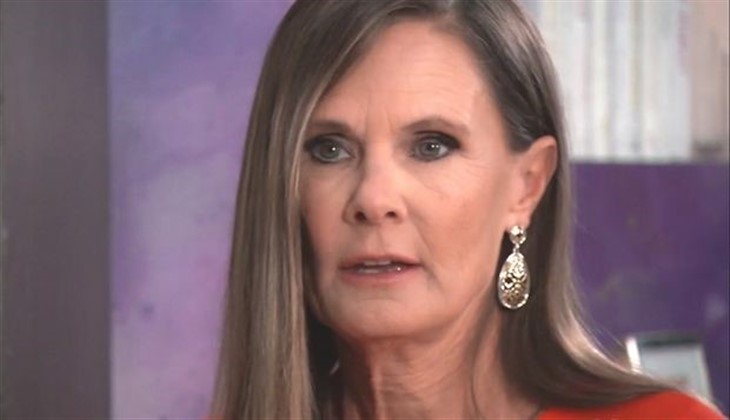 General Hospital (GH) spoilers and updates tease in this week’s Sneak Peek, that Lucy Coe (Lynn Herring) will blast Anna Devane (Finola Hughes) for interference. She knows she’s got Victor Cassadine (Charles Shaughnessy) wound around her little finger, but Anna blasts back about the danger Lucy’s in.

Lucy had been in her office where Victor had put a diamond necklace on her just as her boyfriend Martin Grey (Michael E. Knight) walked in unexpectedly. After getting Martin to dial down his jealousy with a passionate kiss after Victor left, she found out Anna had called Martin to come home. Lucy was livid as she left Martin standing in her office, saying she had something to do, the something being having it out with Anna.

What she doesn’t know, and neither will Anna, is that Victor’s diamond necklace has a bug in it. He and his henchman Johann Bauer (Max Decker) are listening to every word that Anna and Lucy say.

GH Spoilers – A Litany Of Danger

When Anna finally lets the frantic Lucy into her house, Lucy lets off a litany of dangerous situations she’d handled through the years. She says she’s gone toe to toe with Bobbie Spencer, (Jacklyn Zeman) Tracy Quartermaine, (Jane Elliot) and everyone else in town, it feels like. She talks about being thrust out on stage at the Nurses’ Ball in front of everybody in her underwear, she doesn’t know how many years. She then talks about wearing a beautiful red, red dress with a great big red hat to her wedding. She continues to rant, telling Anna she made all that work, she’s not a quitter, and she’s going to see this thing through to the end.

General Hospital Spoilers – This Is Not A Tik Tok Challenge

Anna loses it at that point, and exclaims, “Oh my god” trying to get Lucy to understand none of that matters; it’s not a charity gala or a tik tok challenge. Lucy claps back with an “ok” but she knows what she knows and who she is and when she has a man wrapped around her little finger. She says Victor is right there wrapped around her little finger and he’s not the first guy, then refers to “the other Victor” (Victor Jerome, played by Jack Axelrod).

She talks about Victor Jerome, who was Ava Jerome’s (Maura West) father eating out of the palm of her hand too-it was a similar situation.  Anna responds, saying she’s well aware of Lucy’s “skills”, and asks if she’s aware of hers?