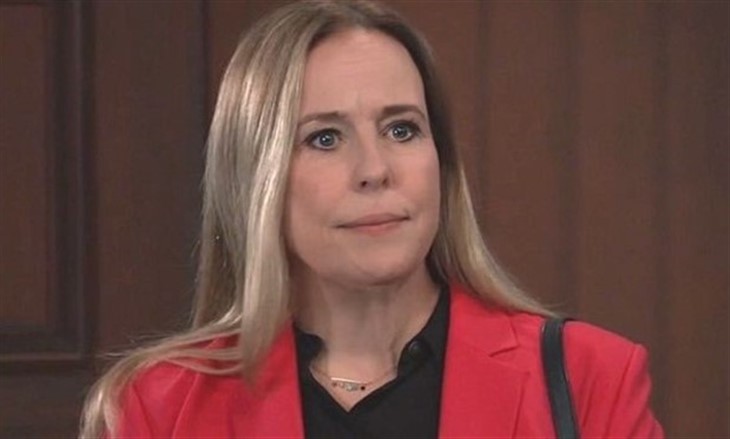 General Hospital spoilers indicate that Genie Frances (Laura Collins) has returned from her annual vacation for a huge comeback story. While Laura has been away tending to her mother, a killer has begun to terrorize Port Charles. Will Laura stop this deranged killer before Port Charles turns into a blood bath?

General Hospital Spoilers – Why Is This Killer Attacking Port Charles?

General Hospital spoilers reveal that Jordan Ashford (Tanisha Harper) believes these attacks may be connected to Sonny Corinthos (Maurice Benard). However, the one person who has threatened Sonny lately is Victor Cassadine (Charles Shaughnessy). Of course, Victor would probably be the one person that Laura would blame since Cyrus Renault (Jeff Kober) is behind bars.

Sonny has his people working on this as well. Unlike Jordan, Laura will work with Sonny to try to solve this mystery. Will Laura and Sonny be able to put their heads together and find out who is behind this? So far there has only been one fatality but that is subject to change. Will Laura’s return put enough heat on this case to solve it?

GH Spoilers – People Are Dropping Like Flies In Port Charles

So far two people have been attacked and one is now dead. It seems another attack is on the horizon and it isn’t likely to stop there. The two victims are both tied to Sonny and the third is rumored to be as well. Laura is keeping up with everything going on in Port Charles. Laura may be at risk if she returns to town but she is needed and will soon return. Can Laura be protected from Victor?

Valentin got Laura out of town to keep her safe. Valentin is also trying to gain access to his daughter again and is having no luck. Can Laura save Port Charles and get her hands on her granddaughter as well? Will Valentin get distracted trying to keep Laura safe once she does return?

Laura is needed to come home to Port Charles and help get things under control. With Victor having a plant in the mayor’s office it would be too easy for Victor to manipulate things in Port Charles. If Victor hired someone to do this, he could have complete protection.

It seems very strange that Victor would suddenly befriend Kristina Corinthos Davis (Lexi Ainsworth) and try to give her protection from the killer. How does Victor think he can protect Kristina when no one knows who the attacker is? No one knows why this person is attacking the people involved. Is Victor wanting to protect Kristina because of what she saw or because he is behind the attacks?