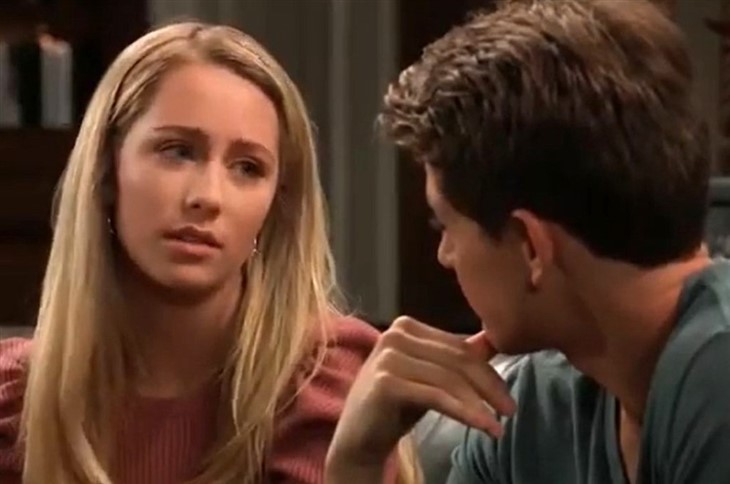 General Hospital spoilers reveal that Josslyn is still not happy that Sonny has pulled Dex into his business. Of course, Michael is the one who planted Dex there and Josslyn may discover that. Dex acts like he didn’t want to beat Felty (Brian Norris) or possibly eliminate him. Josslyn is determined to save him.

Josslyn could see Michael with Dex soon. Michael and Dex have not been very discreet about their meetings so far. Brando Corbin (Johnny Wactor) is rumored to stumble in on a meeting between them soon. If Brando can discover their connection, Josslyn could too. After all, Josslyn is around Michael a lot more than Brando anyway. Will Josslyn demand answers from her brother and Sonny’s new man?

General Hospital’s Sonny always told Josslyn he thought of her as a daughter. Sonny adopted Michael when he was a young boy. Sonny has always treated Josslyn like one of his children. However, when Sonny disappeared Josslyn was heartbroken not only for herself but for her mother as well.

Carly Corinthos (Laura Wright) has been in love with Sonny for decades. Carly had to make so many hard choices when Sonny was gone. Carly also fell in love with Jason Morgan (ex-Steve Burton) who she gave up when Sonny returned. Josslyn is hurt by Sonny’s rejection of the family and wants him to pay.

GH spoilers tease that Josslyn could end up in the very dangerous territory. Josslyn has already tried threatening Sonny. If it comes out that Dex is working against Sonny, he could easily disappear. Josslyn has seen what Sonny and Dex did to Felty. What would happen to Dex if he double-crossed Sonny?

Sonny would never intentionally hurt Josslyn. However, Sonny will not tolerate an employee turning on him either. After all, Sonny attacked Dante Falconeri (Dominic Zamprogna) for the same thing. Before Sonny knew Dante was his son, Dante tried to arrest him. Sonny was later stunned to find out the truth. Could Dex meet a similar fate?

Several people have tried to take down Sonny and have failed. Even with Michael and Josslyn in the mix, Sonny will probably remain standing. Will Dex make a fatal mistake in the end? Will Josslyn get past her aggravation with Sonny and back off?