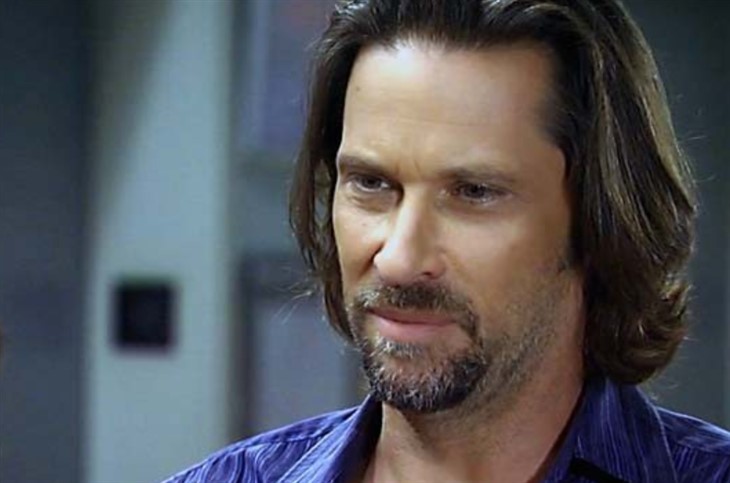 General Hospital Spoilers – Elizabeth Baldwin Woke Up From A Nightmare – Or Was It?

General Hospital viewers will remember that in a recent episode of General Hospital, Elizabeth fell asleep on her couch and saw her lights go out, and a form – a ghost? – come towards her in a menacing manner and tell her not to forget him! The face was blurred out although it could have been Franco – but in a ghostly form, he may not have been the Franco she knew and loved – this person seemed rather sinister! Then she woke up and saw something that shook her to her core; on a painting on the drafting board that is in her living room, someone had freshly painted in red paint the words “Don’t forget me”! This had been the one night that Hamilton Finn (Michael Easton) had not spent on her couch – and after he, Elizabeth, Jake Webber (Hudson West) and Aiden Spencer (Enzo DeAngelis) talked and Jake and Aiden were alone, Aiden had a theory. Aiden asked Jake if it could be Franco?

Gh Spoilers – Franco Baldwin The Not So Friendly Ghost?

General Hospital viewers know that Franco was graveyard dead, as they say, because Cameron Webber (William Lipton) went to look for him in the morgue of General Hospital, not believing he was really dead! But General Hospital viewers cannot rule out Franco returning as a ghost, although if the apparition who visited Elizabeth in her possible nightmare had been Franco’s ghost he would have never done anything to frighten her or speak in a sinister way like that! Many have returned as ghosts and appeared to earthly loved ones in times of stress – including Courtney Matthews (Alicia Leigh Willis) to a young Spencer Cassadine (Nicholas Chavez), Alan Quartermaine (Stuart Damon) to Monica Quartermaine (Leslie Charleson) and Zander Smith (Chad Brannon) to Cameron! So Franco’s ghost coming to visit would not be entirely out of the question, although the apparition Elizabeth saw and who apparently painted the message on the painting may not have been him, unless that is the way Elizabeth perceived him out of guilt for moving on!

General Hospital Spoilers – Why Has Only Elizabeth Baldwin Seen The Apparition If This Is Franco Baldwin’s Ghost?

One question General Hospital viewers have is why, if this is Franco’s ghost doing all these things such as moving Elizabeth’s wedding ring, shredding her wedding dress, and bringing the portrait he painted of her into her house, why hasn’t anyone else seen him? One would think Ghost Franco would be visiting Cameron to support him through his sex video crisis, possibly terrorizing Esme Prince (Avery Kristen Pohl) into a confession instead of Sonny Corinthos (Maurice Benard) having to do it, and visiting the younger boys as well! Ghost Franco could have been on the scene when Peter August (Wes Ramsey) died, kicking him into a fiery abyss after Anna Devane (Finola Hughes) shut his eyelids – what a great revenge scene that would have been! But this scary apparition acted more like Peter than like the loving Franco, and Elizabeth feels no guilt over his death; if Ghost Franco is visiting the Baldwin house, he’s keeping himself unseen!