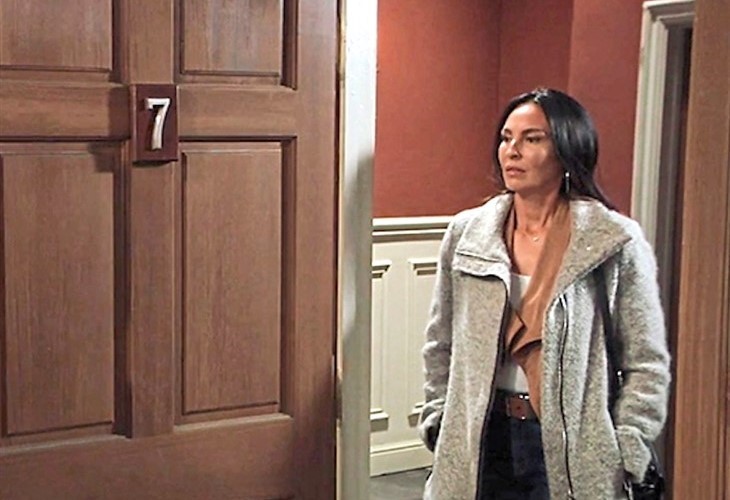 General Hospital viewers will recall that Trina got acquainted with Marshall Ashford (Robert Gossett) in a previous episode of General Hospital at Curtis and Portia Robinson’s (Brook Kerr) housewarming party at their new house. Trina makes a deeper connection with Marshall as she confides in him about her upcoming court case; Trina tells him if she pleads guilty, in other words, takes a plea bargain, then it’s all over!

Meanwhile, at The Metro Court, Willow talks to Michael Corinthos (Chad Duell) about their own court case – over Nina’s wanting visitation with Wiley Corinthos (Viron Weaver); she tells him that their relationship with her mother, Harmony might work in their favor! General Hospital viewers will recall that Nina had been trying to get Harmony to advocate for her with Willow as Wiley’s adoptive grandmother, hoping Harmony could convince Willow that Wiley needs Nina!

Also in Friday’s General Hospital, Harmony is forced into a meeting at the pier with Brendan Byrne (Josh Coxx) and she is shown in an elevator angrily telling him she will meet him! Brendan has found a huge accordion file on Harmony in his late brother, Neil Byrne’s (Joe Flanigan) effects and General Hospital viewers can expect he’ll likely attempt to blackmail Harmony into something with what he knows about her.

Brendan will want Harmony to meet him down at the pier, and General Hospital viewers know nothing good ever happens there, and in most cases, something bad happens at the pier, ala Duke Lavery (Ian Buchanan) and Jason Morgan’s (Steve Burton) fates –at least the first time regarding Jason! Also, Nina offers her support to someone as she lovingly encourages them to let her be there for them – more than likely this is some more motherly like love for Sonny Corinthos (Maurice Benard) she’s offering!

General Hospital viewers will see that Anna Devane (Finola Hughes) has made it to French Polynesia, where she and Felicia Scorpio (Kristina Wagner) have gone undercover-little does she know the missing in action Valentin Cassadine (James Patrick Stuart) beat her there! General Hospital viewers will recall that they are there to infiltrate a black market auction for what they believe is the Ice Princess; Anna makes an observation that there’s more here than meets the eye!

Meanwhile, back in Port Charles, Curtis is negotiating with Selina Wu (Lydia Look) at The Savoy about that high-stakes poker game she wanted to run there. He tells her that the last term is non-negotiable, and this is likely to be about not bringing any crime in! Back to Sonny, he tells someone that he underestimated them – General Hospital spoilers tease Scott Baldwin (Kin Shriner) will approach Sonny so that may be who he’s talking to!

Y&R Spoilers: Ashland Locke Better Watch Out For His Wife