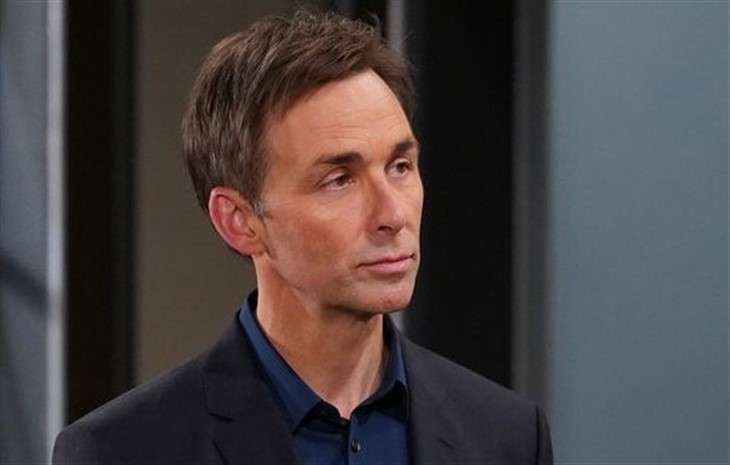 At the PCPD jail, Anna Devane (Finola Hughes) is impatient as she talks to Port Charles Police Commissioner Jordan Ashford (Tanisha Harper). Anna tells Jordan when she gets out of that cell, she can get Victor Cassadine (Charles Shaughnessy) into it. No one is happy that the Cassadine patriarch appears to have concocted a perfect frame up for Anna, since a doppelgänger shot Lucy Coe (Lynn Herring).

The suit the shooter wore as well as the gun she used was planted in Anna’s car trunk and a drone caught the event on camera. Anna feels helpless to do anything for herself or for poor Lucy, caught like a rat in a trap.

Victor appears to be talking about Valentin, gloating that his absence speaks volumes to Attorney Martin Grey (Michael E. Knight) and Attorney Scott Baldwin (Kin Shriner). Felicia Scorpio (Kristina Wagner) stands behind Victor with a dirty look on her face, obviously angry at the Cassadine patriarch. Victor is likely gloating for Anna’s behalf, wanting to dig the knife deeper that her lover Valentin was nowhere to be found as she’s in trouble. Still, it’s difficult to make a murder case stick where there is no body, and Lucy hasn’t been found either dead or alive.

Meanwhile, Valentin has found himself in the right place as Victor’s plane did take him to Charlotte Cassadine’s (Amelie McLain) school in Switzerland. However, as he explains to someone on the phone, he still has fallen right into his father’s plan, albeit a different one than he expected. It’s just crappy that he has been diverted away from Port Charles so he cannot help Anna, even though it’s wonderful to be with Charlotte.

He knows now that his absence enabled Victor to frame Anna for Lucy’s murder. He will finagle a way to try and escape with Charlotte and get her to safety, and himself back to Port Charles to help Anna.

A terrified Olivia cannot even speak as a concerned Robert Scorpio (Tristan Rogers) tells her she looks like she’s seen a ghost. Maybe not a ghost, but something perhaps much more creepy as Heather Webber (Alley Mills) was brought into General Hospital right past her in shackles and chains. Heather screeched that Olivia had married up to being a Quartermaine, while leaving her son Steven Lars Webber (Scott Reeves) to rot in jail for murder. Heather had injected Olivia with LSD shortly before Steve Webber was arrested, which caused Olivia’s psychic visions. If only her psychic visions would return and show her where Lucy is so Robert could get Anna out of jail!

As Terry Randolph (Cassandra James) was trying to distract Jeff and Carolyn Webber (William Moses, Denise Crosby) at a nearby coffee shop in Monterey, California they suddenly left. Terry had to take a call from Britt Westbourne (Kelly Thiebaud) about Willow Tait’s (Katelyn MacMullen) condition and when she returned, they’d gone. Elizabeth Baldwin (Rebecca Herbst) had broken in with her keycode but triggered the alarm, which may have triggered Jeff and Carolyn to leave.

Elizabeth is surprised as Jeff is as well, and she tells him he wasn’t supposed to be there. They haven’t seen each other in over twenty years, but it looks like he and her mother may be able to give her some answers.

Meanwhile, back at General Hospital, it looks like Hamilton Finn (Michael Easton) gets to treat crazy Heather, who’s now strapped to a bed. She is wild eyed as she tells him there are some really crazy people in D’Archam, apparently not including herself. She was brought in screaming like a banshee and laughing maniacally at the scare she gave Olivia when she was brought in. Olivia had been standing with Finn and she explained it was Heather but not that much about her; he may not know that she’s Franco Baldwin’s (Roger Howarth) birth mother.

Wait till she finds out about Franco and that Finn’s dating his widow. That should be interesting.

Days of Our Lives Spoilers: Ava Gets Deadly Help From The Beyond