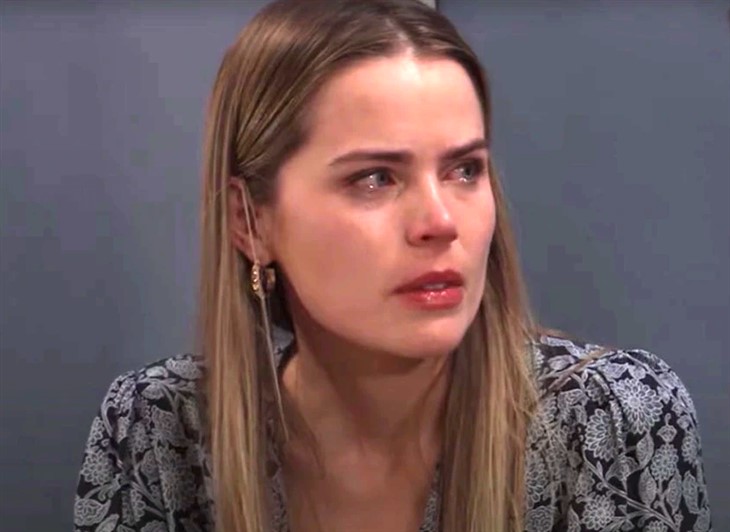 General Hospital (GH) spoilers and updates tease there are hard questions for many Port Charles residents to answer in the next GH! For some, the answers may be even harder!

General Hospital Spoilers – What In The Hell Are You Doing Here?

Sasha Gilmore Corbin (Sofia Mattsson) is shocked by an unexpected visitor and she’s angry; if looks could kill the visitor would already be dead! She appears to be blindsided as well as offended, so chances are it’s someone she doesn’t want there at all! It could be paparazzi Felty (Brian Norris) looking for his memory card or Grant Smoltz (David Lautman) looking for a story!

Sasha turns around angrily and demands what in the hell is the person doing there? Sasha is in no mood to address whatever situation that the person is wanting to address with her!

GH Spoilers – I Hope You Know What To Do

Meanwhile, Sasha’s husband, Brando Corbin (Johnny Wactor) appears worried as he tells someone he hopes he or she knows what to do! This may also be related to the paparazzi reporter and the press which by now will want statements from Sasha about the death of Harmony Miller (Inga Cadranel)! It is a troubling situation all around for Sasha and Brando both, with her having run over Harmony and now Harmony has died. Sasha shouldn’t blame herself because it was an accident so maybe Brando’s asking advice on how to help her!

General Hospital Spoilers – How Exactly Did You Manage That?

Port Charles Police Department Commissioner Jordan Ashford (Tanisha Harper) has somewhat to say to her ex-husband Curtis Ashford (Donnell Turner)! Previous GH episodes revealed that Curtis had tried to get Jordan to look into Marshall Ashford’s (Robert Gossett) police files and she had refused. Curtis then went to Selina Wu (Lydia Look) for the information in exchange for letting her run her poker games at The Savoy.

Curtis may be asking Jordan to start a search for Marshall, but she wants to know how he got his information! She asks him how exactly did he manage that when she had said no?!

Nina Reeves (Cynthia Watros) is angry as she demands Scott Baldwin’s (Kin Shriner) full attention at the nail salon! Her court case is looming where she will be trying to force the issue legally of being able to have visitation with Wiley Corinthos (Viron Weaver)! To complicate matters, Willow Tait (Katelyn MacMullen) and Michael Corinthos (Chad Duell) are dealing with Harmony’s death, who they just found out was not Willow’s biological mother. Nina is pressing the issue with Scott to get on the ball so Wiley will have time with her, his biological grandmother!

A tearful Willow pleads with Carly Corinthos (Laura Wright) back at the Quartermaine gatehouse where she and Michael live with Wiley. She wants to know if Harmony told her anything about her apparent adoption – Dante Falconeri (Dominic Zamprogna) had told her Harmony wasn’t her biological mother, but not much else. Even though Willow obviously thought of Harmony as the mother who raised her, she must be asking Carly if she told her who her biological mother was or is.

This of course puts Carly in a huge spot because it was Harmony’s dying wish for Willow to never know that Nina is her biological mother! Will Carly lie and keep Harmony’s dying secret, considering Dante already told Willow that her adoption was a crime?

At Sonny Corinthos’ (Maurice Benard) office, Dex (Evan Hofer) has a job interview. Sonny was impressed by how Dex handled himself and how he broke up a fight between two boxers at Volonino’s Gym. Dex reminded Sonny of a young Jason Morgan (Steve Burton) back when he first became Sonny’s enforcer. Sonny knows that working for him in his “other business” may not quite be what Dex had in mind when he asked him for a job! Sonny tells him in no uncertain terms if this is going to be a problem for him, they stop right now!

Days of Our Lives Spoilers: Ciara And Satan’s Baby Is Ready To Be Born