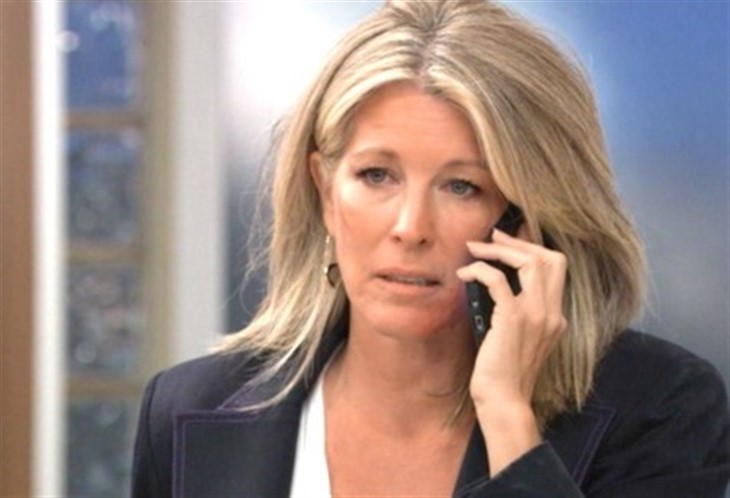 Carly keeps going over in her mind what she saw in Alexis Davis’ (temporarily Stephanie Erb) fireplace that Harmony tried to kill her over. She had read in Neil Byrne’s (Joe Flanigan) notes from a therapy session with Harmony that she felt guilty about keeping a child that wasn’t hers. She puts that together with Harmony having worked as a nurse in the same building as Phyllis Caufield, (Joyce Guy) who she knows was Nina Reeves’ (Cynthia Watros) nurse.

Carly remembers that Phyllis had delivered Nina’s baby, Nelle Benson (Chloe Lanier) to Frank Benson (most recently James Patrick Stuart) through an illegal baby broker. Carly also remembers Harmony saying Nina’s name when she was trying to pressure her to tell Willow the truth, and she wonders what Harmony meant.

Carly knows what she’s thinking, but she doesn’t know for sure if she wants confirmation; she knows that Harmony, working under the name Lorraine Miller knew Madeline Reeves (Donna Mills). She remembers the necklace that had two halves of a heart that she and Jasper Jacks (Ingo Rademacher) had tracked down Phyllis with – Nina now wears both halves. Willow looks nothing like Nelle, but Carly wonders if the two halves of a heart represented twins – fraternal twins. As much as she dreads what the truth could be, she asks herself if the one half heart necklace Madeline left Nina supposed to have been Willow’s? Carly really doesn’t want Willow to be Nelle’s sister and Nina’s spawn, so she sets out trying to prove or disprove her theory!

The kind of detective work Carly’s going to need done might be more than what she can do on her own, but she starts with what she knows. She knows Curtis Ashford (Donnell Turner) doesn’t do private investigator work anymore and besides, he’s sympathetic to Nina. She may enlist Sam McCall’s (Kelly Monaco) help to try and find any kind of paperwork trail, although there probably isn’t one considering the desperate measures Harmony took.

Carly honestly hopes that Willow doesn’t turn out to be Nina’s daughter and Nelle’s twin although it looks that way! Sam is glad to help, as is Alexis – and they recall Harmony and Nelle were cellmates at Pentonville; how bizarre is that!

Since Harmony committed two murders trying to keep this secret about Willow not really being her child, anything left that wasn’t burned in Alexis’ fireplace is evidence. Make that two murders and two attempted murders – Carly will need to involve Dante Falconeri (Dominic Zamprogna) in the search as well. Carly wants to be off the official record with this search for Willow’s parents, however, and she doesn’t want either Willow or Michael to know her suspicions – yet. Dante says a simple way to handle this would be to compare DNA between Harmony and Willow, and both are on file at GH. Carly thinks to herself that comparing DNA between Willow and Wiley Corinthos (Viron Weaver) would be quicker – she may have to get her mother Bobbie Spencer (Jacklyn Zeman) in on it!