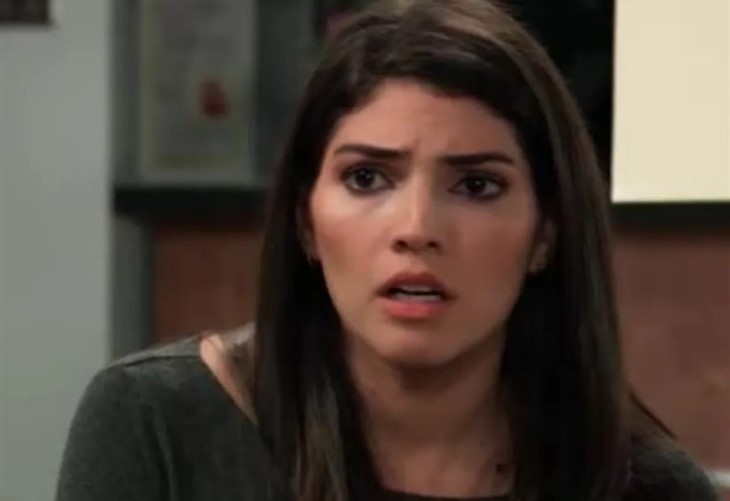 General Hospital (GH) spoilers and updates for Friday, March 1, 2022 tease dramatic situations for Port Charles residents as well as General Hospital fans with old mysteries coming to a head and new ones beginning!

General Hospital viewers first will see Brook Lynn Quartermaine (Amanda Setton) affected by something she sees, and she has some pertinent questions for Michael Corinthos (Chad Duell); she wants to know if Michael thinks someone is interested! General Hospital viewers will recall that she and Harrison Chase (Josh Swickard) shared an unexpected but passionate kiss before she left Port Charles to visit her mom, so that has to be who she’s asking Michael about!

Meanwhile, Hamilton Finn (Michael Easton) has some not so good news about his budding relationship for Chase, as he tells him Elizabeth Baldwin (Rebecca Herbst) and he are no longer seeing each other romantically. Viewers will recall that with all the strange occurrences happening that seemed to be related to Franco Baldwin’s (Roger Howarth) death, Elizabeth opted to put a stop to dating for the time being and focus in on her boys.

General Hospital viewers will also see Elizabeth having a good talk with her two older boys, Cameron and Jake Webber (William Lipton, Hudson West). Jake seems to be having a lot of difficulty working through the deaths of first his beloved stepfather Franco, and then his birth father Jason Morgan (Steve Burton) not even a year later. General Hospital viewers know that Cameron, of course has some other issues he would prefer not to burden his family with – namely, a sex tape gone viral thanks to Esme Prince (Avery Kristen Pohl)! Earlier in the preview Elizabeth talks to her boys, asking them to at least give it a try, and then later, with his mother still in the room, Cameron rushes to stop Jake from opening something on his phone –viewers can guess what that is!

General Hospital viewers will recall the big, although not entirely unexpected reveal of Esme’s paternity in a rather strange discussion with her birth father Ryan Chamberlain (Jon Lindstrom) in a closed room at Spring Ridge. Ryan had told her she needed to step up her game in breaking up Ava and Nikolas Cassadine, (Maura West, Marcus Coloma) so that Ryan can have his Ava back; Esme doesn’t want her as his stepmother either but Ryan insists!

General Hospital viewers will see Esme interrupt Ava and Nikolas’ planning as Ava talks about something not being very much about them; Esme proclaims with a determined look on her face, “Showtime”! General Hospital viewers will note that there seems to be a creepy vibe between father and daughter that almost seems that it is more a relationship between master and unwilling slave!

Also on General Hospital Friday, March 11, Willow Tait (Katelyn MacMullen) questions someone as to what does that look like for them; in Thursday’s General Hospital episode Nina Reeves (Cynthia Watros) asked Sonny Corinthos (Maurice Benard) a favor. Nina had informed Sonny of her plans to legally fight for visitation of their mutual grandson Wiley Corinthos (Viron Weaver) but then backed down when he said he’d talk to Michael Corinthos (Chad Duell); Willow may be speaking to that issue.

Back at the Corinthos home, more drama from the sex tape gone viral plays out as Carly Corinthos (Laura Wright) tries to get a tearful Josslyn Jacks (Eden McCoy) to open up about what’s wrong – General Hospital viewers can be sure that Carly will take immediate action when Joss opens up!

Counting On Alum Derick Dillard Celebrates A Birthday – How Old Is He?