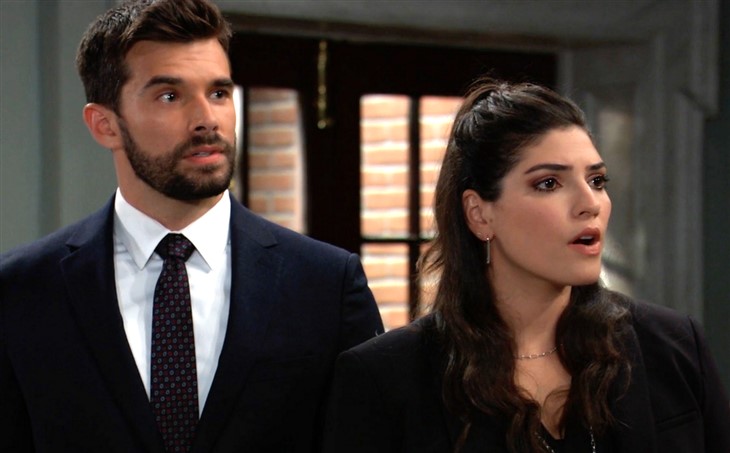 General Hospital spoilers and updates for Friday, June 24 tease secret plots and sensitive plans are happening in the next GH!

General Hospital Spoilers – This Face Is The Solution To All The Problems!

Brook Lynn Quartermaine (Amanda Setton) is trying to reassure Harrison Chase (Josh Swickard) at Kelly’s as he worries about his future with the Port Charles Police Department. He almost made it to the end of his suspension period when he slugged Linc Brown (Dan Buran) and was on the verge of being reinstated. Officer Rory Cabrera (Michael Blake Kruse) responded to Linc’s call and put cuffs on him and brought him into the PCPD.

Brook Lynn is convinced her smiling face is the solution to all their problems and tells Chase exactly that! But just who does she think she’s going to sweet talk into dropping charges for Chase at the PCPD?

GH Spoilers – Is It Worth Pressing Charges?

Port Charles Police Commissioner Jordan Ashford (Tanisha Harper) is in her office at the PCPD, and talking about a situation with someone! Maybe she’s talking about Chase’s arrest to Rory or even talking to Linc himself, saying she’s not sure it’s worth pressing charges -which shows how highly the police value Linc! Perhaps Brook Lynn has made some convincing arguments in behalf of Chase to get him out of trouble and back to work! But it isn’t the first time Chase has gotten himself suspended; he may need some anger management therapy, or at least it’s worth suggesting! Perhaps he should have been in anger management therapy during his suspension instead of suggesting it now!

Brad Cooper (Parry Shen) and Britt Westbourne (Kelly Thiebaud) are talking in a hallway at GH and he wants to make amends, but he’s not being totally honest with her. Britt and Brad had a serious falling out over his filming her on his cell phone and making a GIF that went viral – she was soaking wet getting out of the Metro Court pool! Thanks to Cody Bell (Josh Kelly) and his crash landing his first day in Port Charles, parachuting into the pool at the Society Setups meeting!

Britt tells Brad that she has ulterior motives clearly thinks that he might have ulterior motives! They’ll have to work on being trustworthy to each other if they’re going to rebuild their friendship!

Dante Falconeri (Dominic Zamprogna) can tell Cody is hiding something when he tells him now he can answer some questions that he’s been avoiding! Dante and Cody are at Kelly’s, and Cody’s bruised and has obviously been in some kind of a fight. Dante wants details, including preferably who did it and why! Britt found him beaten badly and barely able to walk in a back alley close to The Savoy. Selina Wu (Lydia Look) had sicced her enforcer Li (Samuel Wang) on Cody because he was so good at poker he cleaned out the house and drove away her customers!  As for Britt patching him up, it was a dirty job but someone had to do it and her Hippocratic oath overtook her disdain!

At The Metro Court, Carly Corinthos (Laura Wright) brags to Olivia Quartermaine (Lisa LoCicero) about her recent business investment; she’d bought enough stock in Aurora Media that it skyrocketed! Carly has a personal stake in this war, meaning the financial war between ELQ, Aurora Media and Valentin Cassadine (James Patrick Stuart). But money isn’t the only personal stake she has in it and making sure the merger of ELQ and Aurora Media goes smoothly is at stake.

A lot of these personal stakes are son Michael Corinthos (Chad Duell) and her hope to be more than a friend Drew Cain (Cameron Mathison)! Carly has a lot to lose financially if things go south!

GH Spoilers – The Victor Cassadine Problem Will Soon Be Over

Valentin is conferring with Attorney Martin Grey (Michael E. Knight) and it looks like he’s finally found a way to get out from under his father’s thumb! Martin tells him that the Victor Cassadine (Charles Shaughnessy) problem will soon be over – which will be a huge relief for Valentin! Anna Devane’s (Finola Hughes) been asking too many questions about Valentin’s cover persona, French Naval Captain Francois Olivier, and his secret caper in French Polynesia. Martin and his sister Laura Collins (Genie Francis) are sure Victor is behind the murder of Luke Spencer (Anthony Geary) and perhaps they have found some proof. Plus, Laura has been investigating getting Victor deported for moral turpitude!

General Hospital Spoilers – A Toast To The Day Everything Changes

Meanwhile, Drew and Michael could be a little overconfident in their successful merger as Drew toasts to the day that everything changes, and they both smile. They’re just toasting with coffee cups however, saving the champagne until later when everything’s confirmed at the ELQ stockholders’ meeting. It’s about to start, but Ned Quartermaine (Wally Kurth) still hasn’t given his agreement to take the paltry position they offered him!

No fat ladies have been seen with microphones either, so it’s not over just yet! Valentin and Ned may announce they’re a team since Drew will give Valentin a warning!