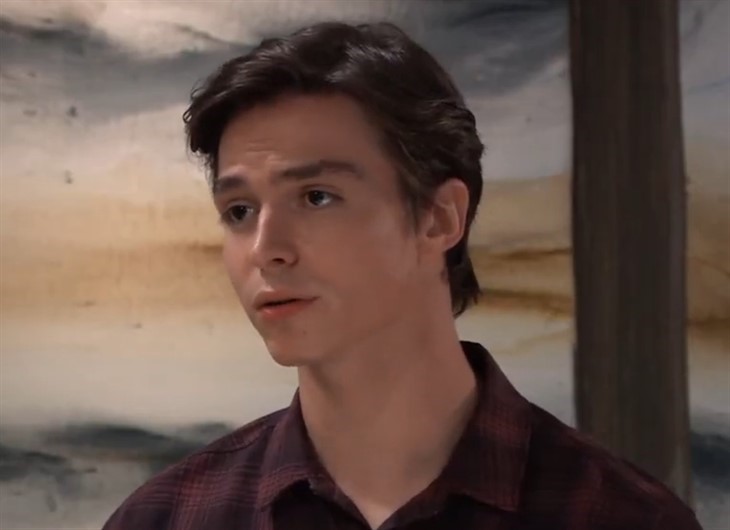 General Hospital spoilers and updates for Friday, July 1 tease there will be surprises, shocks and salacious solutions on the next GH!

At Kelly’s, Spencer Cassadine  (Nicholas Chavez) has a surprise for Cameron Webber (William Lipton); after talking Britt Westbourne (Kelly Thiebaud) into helping him with comparing some DNA. One half of the Esmé Prince (Avery Kristen Pohl) puzzle is now solved, as he tells Cameron that he knows who Esme’s biological mother is! Viewers can expect some mama drama as some strong hints were dropped that Felicia Scorpio (Kristina Wagner) might be Esmé’s mother!

The answer came very quickly, implying the biological mother’s DNA must be on file at General Hospital. There may be those in Port Charles who will be very shocked when Spencer reveals what he found although he didn’t get it to help Esmé!

Ava Cassadine (Maura West) and Scott Baldwin (Kin Shriner) are discussing Ava and Nikolas Cassadine’s (Marcus Coloma) “fresh start” divorce at one of the nice cafés in Port Charles. The plan is to divorce and then remarry, starting a clean slate with each other but Ava seems not so sure about it as she talks to Scott.  Ava tells Scott that she can’t help but think that she and Nikolas are tempting fate as they wait for Nikolas to arrive. The “clean slate” marriage may not be so clean, since she doesn’t realize that Esmé is lurking and overhears their conversation and will soon interrupt! Nikolas and Esmé have a dirty little secret Nikolas is hoping to keep buried!

Esmé is striking already as Nikolas looks troubled – they’re outside the café where he was to meet Ava and Scott and hiding amongst the trees! Esmé smiles when she clarifies Nikolas would do that for her, “that” being using his influence to get her internship reinstated at Spring Ridge. Viewers will recall that Dr. Kevin Collins (Jon Lindstrom) got her internship cancelled and she’s banned from the facility after he found out she lied to him.

Kevin did this for her own protection, because he could tell she is obsessed with his serial killer brother Ryan Chamberlain (Jon Lindstrom). Of course, he doesn’t know that she’s his niece – IF Ryan is telling the truth about being Esmé’s birth father and not leading her on!

Gregory Chase (Gregory Harrison) and Dr. Hamilton Finn (Michael Easton) are having coffee and trying to counsel Harrison Chase (Josh Swickard) about his dire situation with the Port Charles Police Department. Once again hotheaded Chase is in trouble after punching Linc Brown (Dan Buran) while trying to defend Brook Lynn Quartermaine (Amanda Setton)! Brown didn’t care about pressing charges but he wanted Chase permanently fired from the PCPD; Chase is presumably talking about his return to the force as he tells his father and brother that’s not happening as they think!  Port Charles Police Commissioner Jordan Ashford (Tanisha Harper) had already called Chase to her office to discuss options but it doesn’t sound like he has any!

Maxie Jones (Kirsten Storms) and Lucy Coe (Lynn Herring) are trying to plan for the onslaught of orders following Sasha Gilmore’s (Sofia Mattsson) upcoming appearance on the Home and Heart show. At the studios, Maxie is on the phone with Deception Cosmetics’ suppliers, barking out an order to get some product moved-stat, expecting the company’s orders to skyrocket with Sasha’s appearance! This will be the first time Deception Cosmetics are featured on the show hosted by Haven De Havilland (Morgan Fairchild).

Maxie and Lucy want to make sure nothing goes wrong and that it’s a successful launch! They are both a bundle of nerves and excitement trying to make it happen!

Meanwhile, Sasha is meeting with someone at the coffee shop, wanting to know how long does it take? Felty (Brian Norris) had confronted Sasha wanting her to help him get a press pass for her appearance. But Sasha was hit with devastating reminders that her baby died when she found out about Willow Tait’s (Katelyn MacMullen) pregnancy. Sasha sound impatient for a delivery of “stress reliever” order of pills, needing an emergency supply! Sasha may be talking with Felty as she makes her desperate requests!

At the Metro Court, Olivia Quartermaine (Lisa LoCicero) may have a bailout idea for Carly Corinthos (Laura Wright) in the aftermath of the failure of the Aurora Media/ELQ merger. Viewers recall Carly had sold her half of the Metro Court to come up with the funds for her huge purchase of Aurora Media stock.  Later, she was blindsided when Drew Cain (Cameron Mathison) brought her the bad news and he was trying to come up with a plan.

Olivia was Carly’s partner in the hotel and she approaches Carly with her solution, saying she’s going to buy Carly’s half of the hotel! Whether she’ll offer Carly to buy it back to her on payments or splitting the profits remains to be seen.

Brook Lynn Quartermaine (Amanda Setton) wants a permanent solution to the problem of one sleazeball named Linc Brown! She seeks some not so legal help from Sonny Corinthos (Maurice Benard) as she tells him she wants him to take care of the problem! It’s obvious Brook Lynn is desperate to get the rights to her music back and to solve the problem she’s partially responsible for. She feels very guilty about her part in getting Chase kicked off the force!

B&B Spoilers: Quinn Finally Makes It To The Wedding