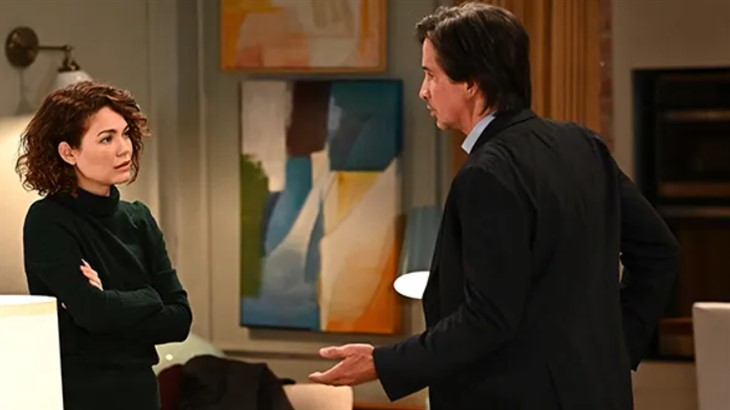 General Hospital spoilers reveal Hamilton Finn (Michael Easton) is growing quite tired of waiting on Elizabeth Baldwin (Rebecca Herbst) to decide he’s worthy of being graced with her time or presence. While Finn is chomping at the bit hoping to score some time with Liz, she seems more preoccupied than ever — which is saying something. When he follows her to Nikolas Cassadine’s (Marcus Coloma) castle, what will she have to say for herself as Finn discovers the truth about what Liz has been hiding?

Elizabeth and Finn have been ships in the night at the hospital, and he can’t seem to catch her at home lately. The more he requests the honor of her company, the more she withdraws from him. Next time this happens, Finn is going to grow restless and will decide to take matters into his own hands. Following Liz without her being aware of it, Finn is going to watch her board the launch to Spoon Island. Will he manage to sneak onto it himself, or might he need to wait for the next trip? Either way, Finn isn’t going home until he has some answers. Why did Elizabeth just ditch him — again — to go see Nikolas?

Finn is expecting the worst as he nears Spoon Island. He isn’t sure how he’s going to navigate his way into and around Wyndemere without anyone noticing, but he’s too invested in his makeshift plan now to back out. While Finn has no way of knowing what he’s about to walk into, he has every reason to suspect Elizabeth is having an affair with Nikolas. However, Finn is going to be stunned when he actually arrives at Wyndemere and lays eyes on what’s really happening there. Elizabeth isn’t having an affair with the man of the castle. She’s taking care of his baby mama!

General Hospital spoilers show Finn is astounded to find out Elizabeth has been aiding and abetting a fugitive from justice, and also aiding and abetting Nikolas in holding her hostage. He’s not sure which is worse. Obviously, Finn’s moral compass doesn’t always point in the same direction.

We learned that when he shoved Peter August (Wes Ramsey) down a flight of stairs and thought he killed him. Further, he really cemented that impression for us when Finn then moved his body to a hospital deep freezer. Does he really have any room to question Elizabeth for helping her friend in his time of need the same way she helped Finn? Stay tuned for more GH spoilers to learn how this turns out.

B&B Spoilers: Sheila On The Run, Deacon Turns Her In