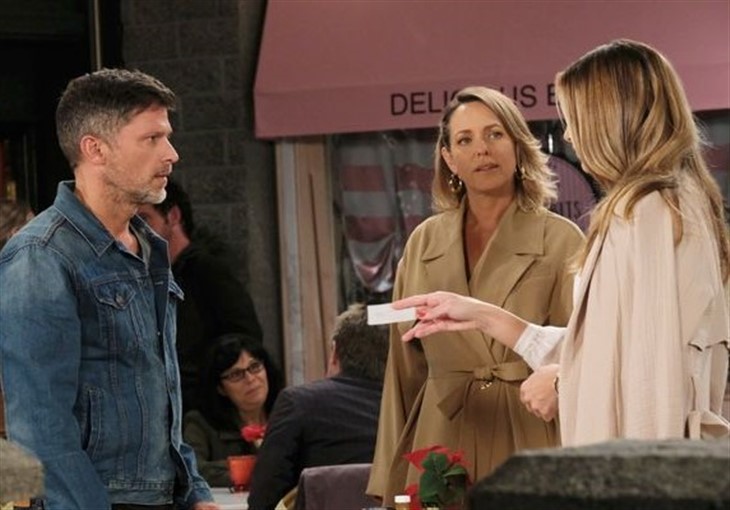 Days of Our Lives spoilers and updates tease that Eric Brady (Greg Vaughan) and Sloan Petersen (Jessica Serfaty) will heat up. But a jealous Nicole Walker (Arianne Zucker) will again interfere, and she’ll fight Sloan for her man.

Thanks to Nicole’s interference between Eric and Jada Hunter (Elia Cantu) Eric is going down a very dark path, after Jada decided to abort. Eric was looking forward to becoming a father, and Nicole didn’t want Jada tied to her and Eric through a baby, and discouraged her from going through with the birth. Eric promptly broke up with Nicole and told her that was something they couldn’t come back from and then he started to drink – and then it only got worse from there.

The next time he saw Nicole she was with EJ DiMera (Dan Feurreriegel) who taunted him and he slugged him. It got worse – Eric’s sister and brother in law Belle and Shawn Brady (Martha Madison, Brandon Beemer) saw it and then he slugged Shawn who then arrested him.

Nicole went on to move into the DiMera mansion with EJ, and even took her daughter Holly Jonas (Elin Alexander) with her, leading to all kinds of misunderstandings. Yet, it doesn’t seem like Nicole wants to let go of Eric even after he wants to let go of her, having made it obvious he couldn’t forgive.

First, Eric meets Sloan in the jail at the Salem Police Station, as he sits in a cell across from Paulina Price (Jackée Harry). He hires her to represent him and doesn’t care what his family thinks or anyone else, being warned that Sloan’s an ambulance chaser but falls for her sob story. But then they get involved as much more than attorney and client, her apparently getting him off his charges, a preview showing her slapping Nicole.

Days Of Our Lives Spoilers – Nicole Walker Catches Them

Nicole catches Eric and Sloan together at the Brady Pub, and she still has the nerve to demand what’s going on. It doesn’t matter to Nicole that Eric doesn’t want her now, she simply won’t accept it and continue to interfere, having marked her territory. Sloan can’t believe that Nicole would have that kind of nerve, because by now she knows the whole story of why Eric got himself arrested.

The two women argue as Eric stands dumbfounded, and Nicole takes her place beside him against her new rival. Sloan won’t stand for Nicole’s impudence and pride and she hauls off and slaps her, what’s Nicole going to do-press charges?