GH Spoilers: Esme Appeals To Elizabeth’s Maternal Side — Will She Help Esme Keep Her Baby? 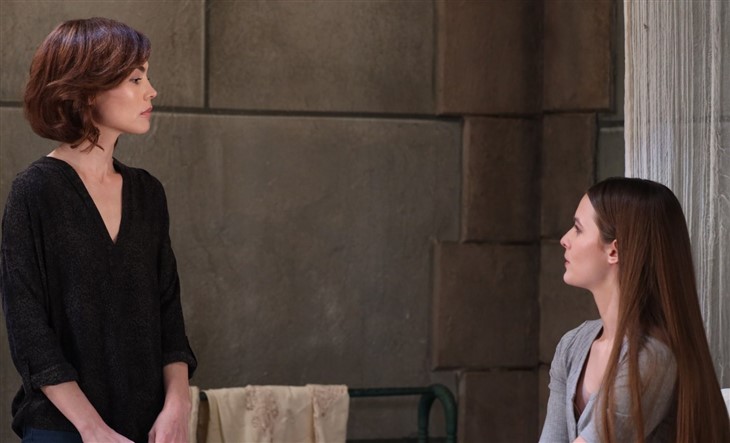 General Hospital (GH) spoilers reveals Esme Prince (Avery Kristen Pohl) is running out of ideas. How is she going to get out of the dreaded north tower she’s been forced to call home anytime before her baby is born? Is her only choice really to sit tight and wait on the baby before finding out by total surprise what Nikolas Cassadine (Marcus Coloma) plans to do with both of them?

She’s starting to grow worried about her child, not just herself — which is a new feeling for Esme, caring about anyone else. She keeps hoping Elizabeth Baldwin (Rebecca Herbst) will see that she does actually care about her baby, but Elizabeth sees nothing in Esme but a criminal mastermind who terrorized her son.

The next time Elizabeth comes around to check on Esme and the progression of her pregnancy, Esme might try to talk to Elizabeth about her own pregnancy experiences. When she appeals to Liz’s maternal side and gets her to open up and talk about what it was like to carry her sons, they might connect in a way neither of them saw coming. Still, it’s everything Esme needs to just hear from another mother right now that this is all going to work out.

Elizabeth may also start thinking about what it might be like to give birth and have your child taken away from you — and it won’t be a comfortable feeling to sit with knowing she’s a part of the plan to do that to Esme. Sure, people give their children up for adoption every day, but Elizabeth was never equipped for that. In addition, she doesn’t imagine Esme was trying to get pregnant, and if she was, she doesn’t imagine she thought it would end with her never getting to know her child. Elizabeth can’t bear to think of her world without one of her boys in it. She got a taste of that when she thought Jake Spencer (Hudson West) was dead and it was the hardest experience of her life.

As Elizabeth tries to calm Esme’s concerns about pregnancy and childbirth, she will see that this pregnancy seems to be the first time in Esme’s life where she’s felt like she had someone in her corner — her child. Still, Elizabeth might remind her the baby isn’t supposed to make the mother feel whole but the other way around. It’s a mother’s job to care for her child, and parents who don’t want to are the worst kind of human beings in her opinion. She might be surprised to find Esme agrees with her — and feels she knows what it’s like to feel unwanted as a child who was given up for adoption. She doesn’t want her own child to feel that way, and Elizabeth can relate. Is Liz softening up to Esme now? Stay tuned for more General Hospital spoilers to find out!