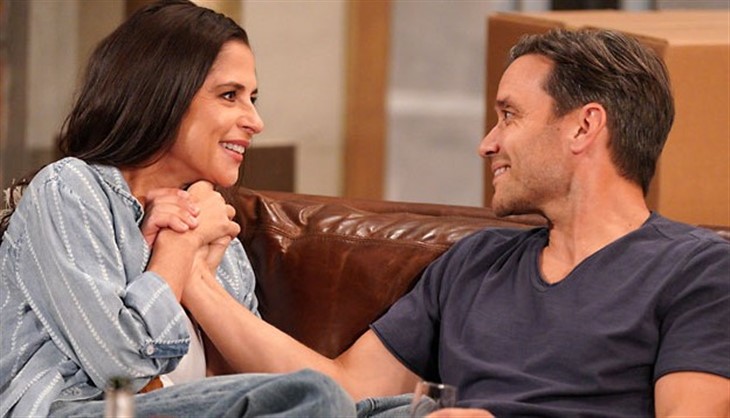 General Hospital (GH) spoilers tease Dante Falconeri (Dominic Zamprogna) has already said I do once before to Lulu Falconeri (Emme Rylan), and not long ago, he thought she was the only person he would ever say it to again. However, that was before he fell for Sam McCall (Kelly Monaco). Their quick-paced romance has taken flight in the most unexpected ways, and Dante is ready to keep moving forward.

Recently, Dante and Sam talked about finances and how they might spend some extra cash. Since a kitchen rehab is not in the works because Sam really doesn’t like playing June Cleaver, they thought about taking the kids on a trip to Iceland. Could that be the magical backdrop for their impending wedding bells?

That is, if Sam says yes! Dante and Sam only recently moved in together, and their efforts to blend their families have gone over well. Still, Dante hasn’t let go of the home he shared with Lulu, even though someone did make an offer. At times, Sam isn’t sure whether Dante has both of his feet firmly in their penthouse together, or if he’s still got one foot in that old house waiting for Lulu to wake up from her coma.

Dante is preparing to ask Sam to marry him, and there’s no one he’s more eager to share the news with than his mother, Olivia Falconeri (Lisa LoCicero). He knows she will be over the moon with joy, and she will certainly offer to help plan the proposal, but Dante is going to have that part covered. Thanks, ma! Let’s hope Olivia can keep this secret under wraps long enough for Dante to pull it off before Sam hears about it somewhere else.

General Hospital Spoilers — Will You Marry Me?

When Dante pops the question, he might do it in a way that doesn’t really jive with Sam. Will she respond well to a marriage proposal in front of the whole Quartermaine family? Does Dante know her well enough to not do that? Sure, these two have been gunning for riding off into the sunset together, but what’s the rush? They only just moved in together, and Sam is still enjoying adjusting to that experience. Is Dante hoping to recreate a certain relationship from his past that he just can’t let go of? Maybe not, but that won’t stop Sam from worrying that there’s more to this proposal than Dante being in love. Stay tuned for more General Hospital news, updates, and spoilers as this storyline continues to develop.

Y&R Spoilers: Sally Destined To Be With Nick? – Adam Is A Pest