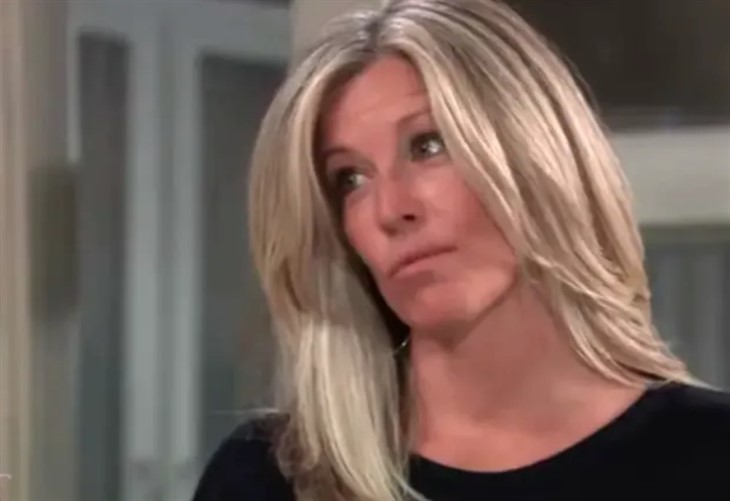 General Hospital (GH) spoilers tease that once again Carly Corinthos (Laura Wright) is in a position that she never wanted to be in. But thanks to Harmony Miller’s (Inga Cadranel) deathbed confession, Carly now knows that Willow Tait (Katelyn MacMullen) is Nina Reeves’ (Cynthia Watros) biological daughter. This isn’t the first time that Carly has been in this exact same situation.

Carly was the first person to realize that Nelle Benson (Chloe Lanier) was Nina’s as well, making her Willow’s twin. Carly and Jasper Jacks (Ingo Rademacher) decided not to tell Nina the truth, but Nelle was already dead so Carly didn’t think it would make any difference. Although Jax is no longer in Port Charles, Carly will still find a confidant but this time she will put her trust in Drew Cain (Cameron Mathison).

Carly hates Nina for not telling her that Sonny Corinthos (Maurice Bernard) was alive in Nixon Falls, but had amnesia. Nina initially tried to tell Carly, but when she called her rival, Carly basically insulted Nina so harshly that Nina hung up the phone. To make things even more complicated, Nina fell in love with Sonny during that time. Drew will be shocked that Carly has once again found herself in a position to keep valuable information from Nina.

GH Spoilers – Drew Cain Will Likely Advise Carly Corinthos To Stay Out Of It!

Harmony asked Carly to keep the secret because she believed that Nina would not be a good mother to Willow. But on the other hand, Drew will point out that keeping the Nelle secret is what started the war between Nina and Carly. Perhaps by telling both Willow and Nina the truth, Carly can finally end the cycle and eventually move on. But despite herself, Carly blames Nina for the end of her marriage and her first instinct will be to do whatever will cause Nina the most pain. She will likely tell herself that Willow is better off not knowing, just like Harmony said.

Despite Drew’s counsel, Carly will likely be resigned to keeping quiet. But Willow’s health has already been in question for the past few months. And with the stress of Harmony’s death, finding out she was adopted, and learning that Harmony was a murderer, whatever is wrong with Willow may happen even sooner. And if Willow needs a transplant or a transfusion, then Carly will have to reveal the truth anyway. And then Carly will look bad for once again keeping such important information from both Willow and Nina!

Will Carly take Drew into her confidence? Will Carly once again choose to hurt Nina? Will Willow’s health force Carly to reveal her secret anyway? Anything can happen in Port Charles so stay tuned to General Hospital airing weekdays on ABC. And don’t forget to check back right here regularly for all your General Hospital news, information, and spoilers!

Y&R Spoilers: Diane’s Put To The Test By Kyle