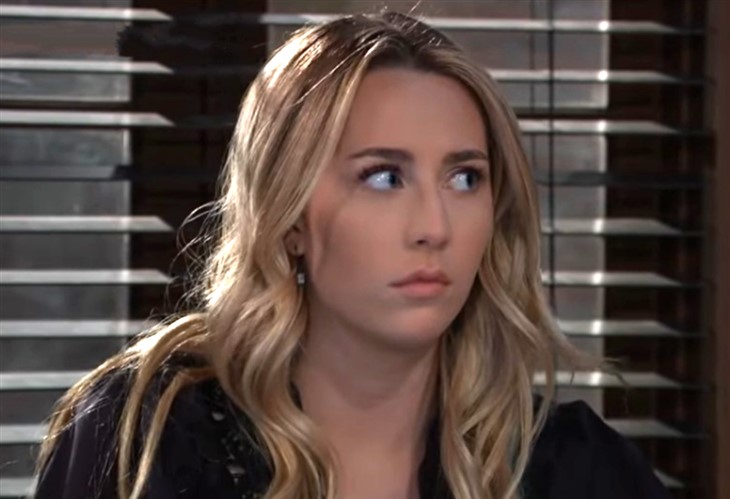 General Hospital (GH) spoilers for Tuesday, May 10 2022 tease that secrets will be exposed and plots made in the next GH!

General  Hospital Spoilers – Why Would You Hurt Her That Way?

At Kelly’s, Josslyn Jacks (Eden McCoy) approaches Cameron Webber (William Lipton) after walking in on him hugging Esme Prince (Avery Kristen Pohl). Esme actually was hugging him, but Joss didn’t know that as she told her to get her tentacles off of him!

Neither does Joss know that Cam was just trying to stall Esme from going back to Wyndemere, where Spencer Cassadine (Nicholas Chavez) is searching her room.

Spencer is looking for evidence that will clear Trina Robinson (Tabyana Ali) of the charges Esme framed her for. Josslyn lays into Cameron, wanting to know why he would hurt Trina that way?

GH Spoilers – Goad Her Into Making A Mistake

Meanwhile, Trina has returned to her job at the Jerome Art Gallery where Ava Jerome Cassadine (Maura West) is plotting Esme’s downfall. Ava has a plan to make Esme expose herself and confess to framing Trina; she tells Trina to goad Esme into making a mistake and then trip her up!

Ava may have a good idea there if Trina can tap into Esme’s weaknesses and exploit them. Insecurity and neediness are obviously weaknesses Esme has, not to mention her jealousy, and an often used interrogation technique might work.

General Hospital Spoilers – What Else Are You Hiding?

Spencer is still at Wyndemere Castle in Esme’s closet where he found a shoebox with a bundle of letters, a fuzzy toy and a manila envelope. Esme had gotten a new letter from her nanny in England, Maggie Fitzgerald (uncast character) and had put it in a manila envelope separate from the rest.

Spencer is looking through the box and has possibly already seen some things that raised his suspicions; perhaps the other letters are some from Ryan! Spencer talks to Esme while thinking out loud, “what else are you hiding?”

GH Spoilers – Do You Think Any Of That Story Is True?

Willow Tait (Katelyn MacMullen) is skeptical as she asks someone if they think any of that story is true; it may be Alexis Davis (temporarily Stephanie Erb) she’s talking to. General Hospital spoilers for Tuesday tease that Alexis visits Willow to tell her more about what she knew about Harmony Miller (Inga Cadranel).

Willow may have her doubts that Harmony would have ever worked as a nurse, and especially not with Phyllis Caulfield (Joyce Guy)! Alexis may also tell Willow that she had strongly encouraged Harmony to tell Willow the truth that she wasn’t her birth mother.

Harmony had feared rejection from Willow if she ever told her the truth!

Michael Corinthos (Chad Duell) tells someone something isn’t that simple. This could be about the impending court case for Nina Reeves’ (Cynthia Watros) brought obtain her rights to visit Wiley Corinthos (Viron Weaver).

He could also be talking with Ned Quartermaine (Wally Kurth) about his and Drew Cain’s (Cameron Mathison) plans to merge ELQ with Aurora Media, which are already started.

It certainly isn’t a simple process to merge two large corporations, there is a lot of planning and legal papers to file with the securities commission and other legal entities.

It is complicated and involved, and requires a lot of time. That is why Drew and Michael got started on it quickly!

GH Spoilers – The Answer Is Yes

At Charlie’s Pub, Carly Corinthos (Laura Wright) walked in on a conversation Nina was having with Ava, who obviously left after seeing Carly in the doorway! Now Carly has taken Ava’s place at the table, where a formerly pleasant conversation between two friends was taking place!

Carly will bring the drama as she and Nina talk about the court case, but Nina has plenty of drama of her own – she’s fighting fire with fire! Carly tells Nina if she’s wondering if she has talked to Sonny Corinthos, (Maurice Benard) the answer is yes! Nina’s attorney, Scott Baldwin (Kin Shriner) wants Sonny to be on their side at court!

General Hospital Spoilers – How Can I Help?

At the Quartermaine mansion, Ned approaches Drew and Drew asks him how he can help. Ned’s answer is crystal, as he demands of Drew to call it off! “It”, of course is the merger between ELQ and Aurora Media, which is already in process.

The merger was Drew’s idea, to get his ELQ shares back to the Quartermaine side and away from Valentin Cassadine (James Patrick Stuart)! The problem Ned has is that Michael and Drew didn’t involve him in the process or in the proceedings, and he doesn’t even know if he still has a job!

B&B Spoilers: The Gravity Of Sheila Killing Finn Sinks In