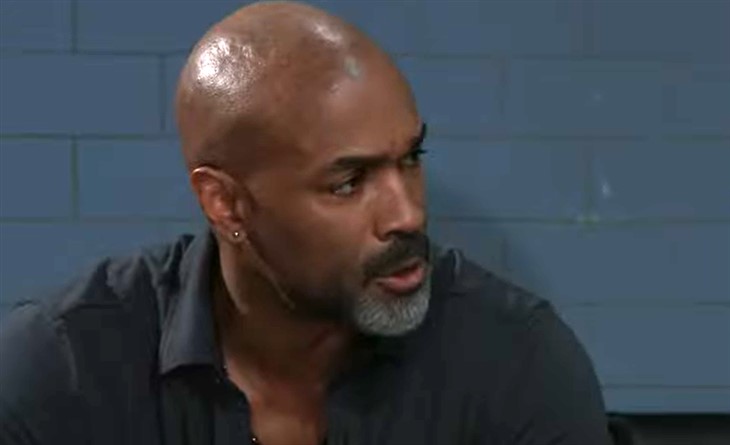 General Hospital (GH) spoilers and updates tease there are some answers but still a lot of questions for many in Port Charles in Monday’s episode of GH!

General Hospital Spoilers – I Found Something

In the waiting room of the hospital in New York where Marshall Ashford (Robert Gossett) was taken following his stabbing, TJ Ashford (Tajh Bellow) talks to Curtis Ashford (Donnell Turner). TJ had taken Marshall’s bag of personal items as he and Molly Lansing-Davis (Haley Pullos) waited while Curtis went into sit with his father, who lies unconscious and on oxygen. TJ tells Curtis that he found something he wasn’t expecting among Marshall’s things and talks to him about what it means.

Viewers will recall that Sonny Corinthos (Maurice Benard) stopped a bottle of pills Marshall had dropped from rolling away at GH a while back. The pills were risperidone, a powerful anti-schizoaffective medication used to treat schizophrenia and bipolar disorder and TJ will explain that Marshall must have one or both conditions.

GH Spoilers – I Don’t See A Way Out Of This

Brook Lynn Quartermaine (Amanda Setton) remains frustrated with her predicament caused by Linc Brown (Dan Buran); at the Quartermaine gatehouse she talks with someone. She is likely talking to Harrison Chase (Josh Swickard) who knows about the situation firsthand, although she could also be talking to her father Ned Quartermaine (Wally Kurth). Ned and Chase had just gotten done singing one of Brook Lynn’s songs at Leo Quartermaine’s (Easton Rocket Sweda) birthday party and Ned had left. Brook Lynn and Chase were the only ones left when the smarmy record producer told her he still had control of her songs; she doesn’t see a way out of this!

At GH, Dr. Hamilton Finn (Michael Easton) talks to Chase, and tells him he thinks he knows who has been harassing Elizabeth Baldwin (Rebecca Herbst)! Viewers will recall from the previous episode that Cameron Webber (William Lipton) came home while his mother seemed to be in a trance, cutting up a beloved drawing by her niece. Finn came to the Baldwin home after Dr. Kevin and Laura Collins (Jon Lindstrom, Genie Francis) called and couldn’t find Elizabeth who had disappeared from their house.

Chase, of course had been hit in the back of the head and knocked out when he was doing guard duty and surveillance at the Baldwin house. Finn updates his brother on what has happened and that he thinks Elizabeth herself is the culprit but she hasn’t been aware of what she has been doing.

GH Spoilers – Am I Losing My Mind?

Elizabeth, in the meanwhile, is also at General Hospital and quite likely she’s talking to Kevin in his office. She is frightened and asks if she is losing her mind, as she was when Finn was at the house the night before and her son Cameron verified what he saw. Cameron had also looked shocked and frightened because he couldn’t even get her attention as though she were in a trance. Chances are, either as Finn suggested she has a rare form of sleepwalking or she has developed dissociative identity disorder and she has an alter, or alternative personality.

General Hospital Spoilers – Nothing Else Can Fix The Situation

Britt Westbourne (Kelly Thiebaud) is obviously in a yoga class as she seems distressed and tells someone nothing else can fix the situation! Carly Corinthos (Laura Wright) is also at a yoga class in Monday’s GH episode and doesn’t like being confronted there so that may be who Britt is talking to! It seems like Britt will get around as she’ll also talk to her buddy Brad Cooper (Parry Shen) and ask him how he likes his working situation.

That might be a situation that nothing else can fix; he remains under the thumb of his aunt Selina Wu (Lydia Look) who has him running poker games at The Savoy! Unfortunately, Britt wasn’t able to convince her co Chief of Staff, Terry Randolph (Cassandra James) to take a chance on hiring him!

GH Spoilers – I Have A Few Punches I Can Throw Myself

Nina Reeves (Cynthia Watros) talks to Maxie Jones (Kirsten Storms) and it looks like she’s talking about her visitation hearing over Wiley Corinthos (Viron Weaver). The visitation hearing at court is starting the next day and Nina tells Maxie she has a few punches she can throw herself! Maxie likely refrains from getting into the middle of the mess although she can always be counted on for a listening ear!

The court hearing promises to be an explosive one with both sides digging up a lot of dirt and throwing a lot of shade at the other! Nina feels confident that she can win, no matter what kind of ugliness takes place.

Speaking of Nina’s court hearing, Dante Falconeri (Dominic Zamprogna) has some advice he hopes his father Sonny will listen to ahead of court. Dante cautions Sonny to think about something first before he takes the stand for Nina! Dante is probably reminding him of Michael Corinthos’ (Chad Duell) vitriol against Sonny.

In previous episodes Sonny had talked to Dante about Michael’s threats and that he wanted to take Sonny down! Dante likely wants him to think about not only the threats but the possibility of losing his relationship with Michael and also Sonny’s younger daughters forever!