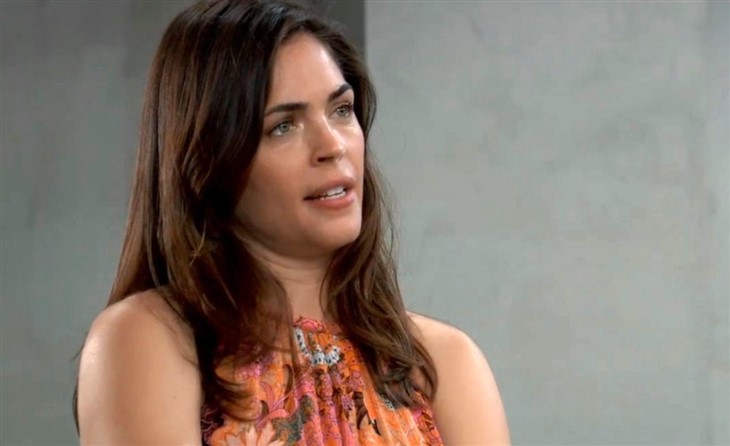 General Hospital (GH) spoilers reveals Britt Westbourne (Kelly Thiebaud) has been mourning the loss of the life she thought she was going to have. She found Austin Gatlin-Holt’s (Roger Howarth) support invaluable recently when he gave her a shoulder to cry on and a hand to hold — not to mention hooking her up with one of the leading Huntington’s Disease specialists in the world.

Britt might be grateful to Austin for being a friend during this torturous time in her life, but she’s not so sure she wants his opinion about what should come next for her. Furthermore, she hadn’t considered the impact her secret might have on his life, and now that it’s too late to undo it all, she’s not sure how to proceed when she isn’t ready for the world to know she’s dying. Is running away the answer? Austin doesn’t seem to think so.

When Britt and Austin find time to reconvene, he’s going to be curious how she’s handled her emotions ever since meeting with the specialist and finding out she is not in Stage I of Huntington’s, but Stage III. When Britt tells him she’s thinking about hightailing it to someplace else — perhaps a warm and sunny destination — he’s going to be shocked. Austin is unaware that Cody Bell (Josh Kelly) and Britt came to blows, and he doesn’t know she’s revealed the truth to her mother, Liesl Obrecht (Kathleen Gati). So, while it makes perfect sense to Britt that she should leave town while she still can, Austin is going to disagree.

From his point of view, she should be sticking close to home and enjoying the time she had left by spending it with loved ones, who can help support her as her health declines. That’s the last thing she wants though. Britt wants her mom and friends to move on with their lives and not put them on hold to watch her die. As Austin combats Britt’s plans to leave Port Charles, she might not take kindly to him questioning her. Sure, he was a big help and a friend when she needed one most, but she’s a grown woman who gets to make her own decisions. While Austin respects that, he doesn’t think Britt is thinking clearly or being reasonable — and he’s right. What would Britt’s family think about her plan to disappear and die alone? Austin might suggest that they ask Maxie Jones (Kirsten Storms).

Whether Maxie walks in on Britt and Austin in a heated moment, or she learns of the time they’re spending together some other way, word on the street is she’s going to start asking questions about what is going on between them. Her former sister-in-law and her boyfriend keep winding up in their offices together, and now they’re arguing passionately with one another?

Maxie might demand for them to make it make sense, but Austin isn’t going to feel it’s his place to reveal Britt’s secret, and Britt isn’t ready for Maxie to know. As her secret begins to cause problems for Maxie and Austin’s relationship, she just might see it as further support to put her exit plan in motion. This storyline is still gaining traction. Stay tuned for more GH news, updates, and spoilers just ahead!