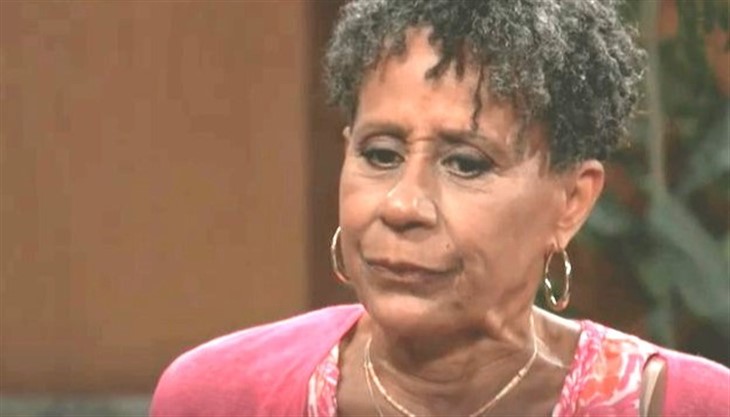 At GH, Dr. Portia Robinson (Brook Kerr) stands with Stella in a hallway with Marshall Ashford (Robert Gossett) looking on.

Portia is undoubtedly talking about Curtis Ashford’s (Donnell Turner) recent genetic testing that showed he doesn’t carry any genes for schizophrenia. Stella is excited but also appears to be puzzled; she asks if Marshall’s diagnosis was wrong.

Portia likely will have to explain that the genes for schizophrenia don’t always pass to both children. But that may lead to even more questions considering Curtis’ brother wasn’t diagnosed with the disease either, although he did apparently suffer from post-traumatic stress disorder.

Alexis Davis (Nancy Lee Grahn) will also seek out Curtis, and the last beef she had was over her trying to draw out the Port Charles Hook, who she received a letter from.

Jordan had put the kibosh on Alexis trying to do anything further through the Invader, and it sounds like The Port Charles Hook nightmare may be what Curtis is talking about. Alexis had called out Esmé Prince (Avery Kristen Pohl) as the likely suspect.

It’s hard to believe it’s already been a year since Trina was arrested and Rory brought her a soft drink in the questioning room at the PCPD. Trina smiles and looks positive, but inside she’s got to be struggling with her feelings for Spencer.

The last big date she went with Rory to was out of town to Comic-Con and he tried to consummate their relationship. But Trina could only think of Spencer, and couldn’t get him out of her mind.

Meanwhile, in the library at Pentonville, Cyrus talks to Spencer and hopes he’s realized which great-uncle he can trust. There was a little showdown between Cyrus and Victor the last time Victor came to visit, and Cyrus vowed to protect his great-nephew from the Cassadine-side patriarch.

Victor appeared to be just a tad intimidated, knowing who Cyrus is but this was something he didn’t apparently know-that he’s Laura Collins’ (Genie Francis) big brother. Victor concluded his visit with Spencer, miffed at being interrupted and went off in a minor huff.

Elsewhere in Port Charles, Victor is outside and meeting with his contact in Laura’s office, Deputy Mayor Eileen Ashby (Heather Mazur). He’ll claim that his plans are alive, possibly talking about Lucy Coe (Lynn Herring) and Holly Sutton (Emma Samms).

Victor was livid to find out Holly was in the wind and the Ice Princess necklace was destroyed from his contact at the cabin where Holly had hidden.

Now he’s really mad as he learns something from Ashby, and he says whatever that is, is unacceptable. Victor’s “plans” may not be as “alive” as he thinks they are, or at least not as accessible.

At Wyndemere Castle, Elizabeth Baldwin (Rebecca Herbst) has come to check in on her unwilling patient, Esmé, who says she, for one, cannot wait. Elizabeth had brought her some prenatal vitamins her last visit, after letting the conniving patient know she can’t get anything by her.

Esmé had feigned fainting and in front of Nikolas Cassadine (Marcus Coloma) who was afraid, Elizabeth told him that she’d need an emergency c-section with no anesthesia.

That brought Esmé out of her “coma” quickly, and the latest trick is to throw most of her prenatal vitamins away. Elizabeth again calls Esmé’s latest bluff.