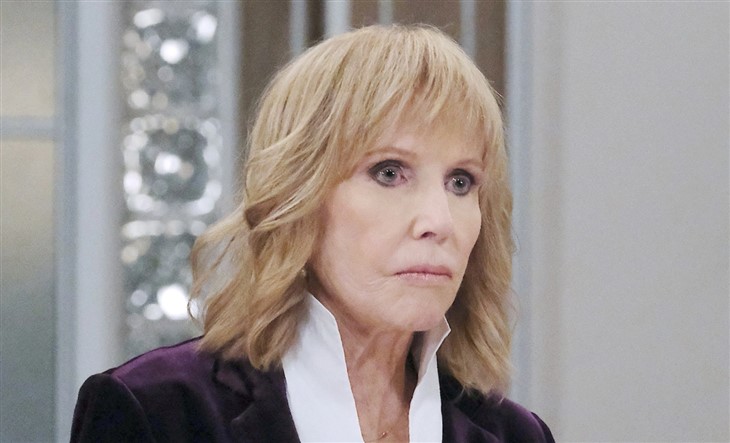 General Hospital (GH) spoilers tease newcomers to General Hospital might not understand just how deep the hatred runs between Monica Quartermaine (Leslie Charleson) and Carly Spencer (Laura Wright). This isn’t your run-of-the-mill in-law drama. Monica knew Carly was going to be trouble for their family from the start, but she was powerless to stop her sons from getting involved with her.

General Hospital Spoilers — It Began and Ended With A.J. Quartermaine

When Carly initially coupled up with A.J. Quartermaine (Sean Kanan), Monica wasn’t thrilled, given Carly’s reputation around the hospital following what she did to Bobbie Spencer (Jaclyn Zeman) by sleeping with her stepfather Tony Jones (Brad Maule). Still, Carly was comfortable with the Quartermaine lifestyle, and Monica might not have been too far off the mark to assume she was a gold digger. Carly ended up pregnant with A.J.’s son but didn’t want him to be a part of the child’s life. So Jason stepped in an pretended to be the father until the truth finally came out. Monica might not have lost her grandchild, but she definitely lost any respect she still had left for Carly.

Monica may never forget the role Carly played in A.J.’s demise, but over the years she has come to recognize that A.J. was no saint. In fact, he was an alcoholic. He also wrecked Jason’s life, the way Monica sees it. Jason was preparing to become a doctor when A.J. crashed the car they were traveling in, which caused Jason to lose his memory and enter into Sonny Corinthos’ (Maurice Benard) world forevermore. Still, in Monica’s defense, Carly and Sonny both coerced A.J. into signing away his rights to Michael Corinthos (Chad Duell), and Carly went out of her way to manipulate A.J. into thinking he was drinking and blacking out again when he wasn’t. So, in many ways, Monica is justified. Still, times change and people do grow.

Most recently, Monica and Carly have agreed upon some semblance of peace. Losing Jason ripped a hole through both their hearts that they equally understand. Monica may not like Carly, and she might even believe Carly has put Jason at risk at times, but she has no doubt that Carly loved Jason more than any other woman ever has. Carly knows what it’s like to grieve the loss of a child, and she knows Monica has felt that pain too many times. The least these women can do is give it a rest. Keep checking back with us for more General Hospital news, updates, and spoilers as they become available.