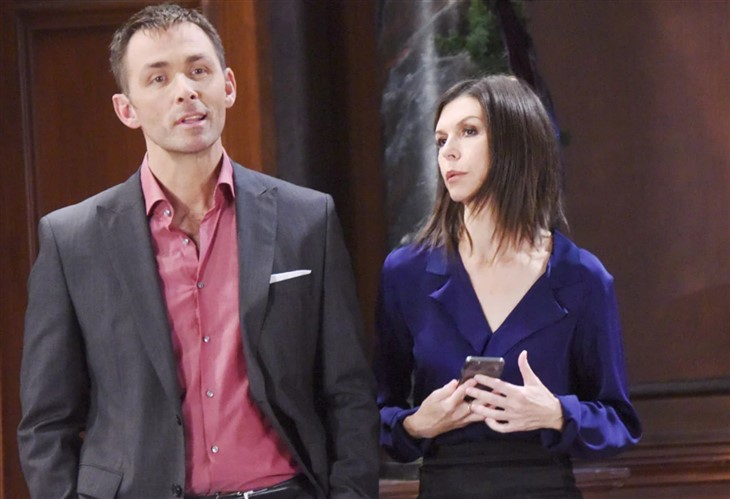 General Hospital spoilers show Valentin Cassadine (James Patrick Stuart) and Anna Devane (Finola Hughes) have known each other for decades, first meeting when they were young WSB trainees. Valentin has always had a thing for Anna and spent years dreaming of her, despite taking a child he thought she gave up for adoption, placing him with Cesar Faison. Too bad Anna didn’t feel quite the same about him — until recently.

The Vanna momentum has been growing since they shared their first kiss on the fourth of July in 2021, but it’s been a slow build since. However, that slow build will finally culminate in everything Vanna fans want to see this coming week when the pair make love for the first time.

They retire back to Anna’s house after their caper with Lucy Coe (Lynn Herring) and Victor Cassadine (Charles Shaughnessy) on The Haunted Star and finally break open that bottle of wine that Valentin brought months ago.

GH Spoilers – One Thing Leads To Another

Romantic time in front of the fire finally prompts Anna and Valentin to give into their feelings and make love. As two mature adults, we’re still not sure why this has not yet happened, but here we are. Needless to say, Valentin is thrilled.

“I think he is amazed by the purity of getting what he always wanted and getting to be with Anna on that level,” James Patrick Stuart said in the October 3, 2022, issue of Soap Opera Digest. “And also have it be much less warped. He was a damaged person [when they met[ and in this moment, it’s purly honest admiration and love.”

Love, you say? So, will Valentin utter the love word? He sure as heck will.

“He professes his love to her and I think he’s being honest,” Stuart said. “They have such a history together. As in love with Nina as Valentin was, he doesn’t have the history with her that he has with Anna…I don’t think he’s as terrified that he’s going to screw it up this time. He’s been through the fire and so in this moment, he’s able to let it be what it is.”

And what it is has now become a partnership in with Anna is going to move hell and high water to get Charlotte Cassadine out of Victor’s clutches. Stay tuned to General Hospital weekdays to see how this story plays out.