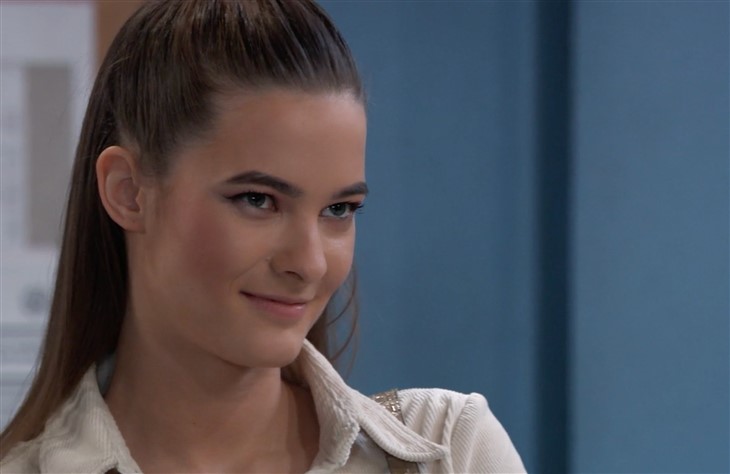 General Hospital viewers will recall that Esme has felt Spencer slipping away from her and into the “claws” of Trina Robinson (Sydney Mikayla) ever since she met Trina, she could tell that Spencer’s attentions were divided! General Hospital viewers will remember also that Esme was insecure and jealous when Laura Collins (Genie Francis) gave Trina a book of photography that Spencer had intended for her at Christmas –you have to admit, Esme didn’t get anything or she would have been bragging!

Esme has been overhearing Victor Cassadine (Charles Shaughnessy) emphasizing the importance of family, and how important family is to him and he’s trying to unify the Cassadines, and she strikes upon an idea to hang onto Spencer. She might even get Victor involved to convince Spencer to do the right thing – and marry the mother of his child, but then, maybe Victor really isn’t that old fashioned, and if she fakes a pregnancy she’ll have to follow through!

General Hospital viewers know that if Esme were to fake a pregnancy by Spencer, she had better do it quickly – and since his prison term at Spring Ridge is only thirty days, it’s not like they haven’t had sex in a year! Perhaps if she did enough snooping around the Quartermaine mansion she might even find Brook Lynn Quartermaine’s (Amanda Setton) old pregnancy pad, but she probably threw it out to make sure Valentin Cassadine (James Patrick Stuart) didn’t find it.

But, as General Hospital viewers can imagine, Esme will have some explaining to do to even try to begin this pregnancy plan, because Spencer knows she’s too smart, although she could always use the old “I forgot to take one of my birth control pills” excuse. Of course, that all depends on if that is the birth control method they use – faking a pregnancy test would be in her wheelhouse, however.

General Hospital Spoilers – Esme Prince Will Have To Think Of Something To Explain Why There’s No Baby, Or Else Get One From Somewhere!

General Hospital viewers can imagine that Esme is more than likely not wanting to take on being a mother, even to a kidnapped baby, let alone one of her own! Both Spencer and Esme would be woefully unprepared to be parents, since their parents are bad examples although at least Spencer has Grandma Laura as a good example; all Esme would have would be Ryan Chamberlain (Jon Lindstrom) – but at least he is a trained pediatrician!

Esme has to decide how pregnant she wants and needs to look once she’s produced the faked pregnancy test, and it would probably be easiest to fake a spontaneous abortion or miscarriage before she starts to show very much. She’d have to get Spencer to the altar and if she times the faked miscarriage well enough she won’t show at all and she won’t have to avoid him seeing her unclothed. Esme’s situation is much different than Brook Lynn’s, it doesn’t look like a pregnancy pad would work!