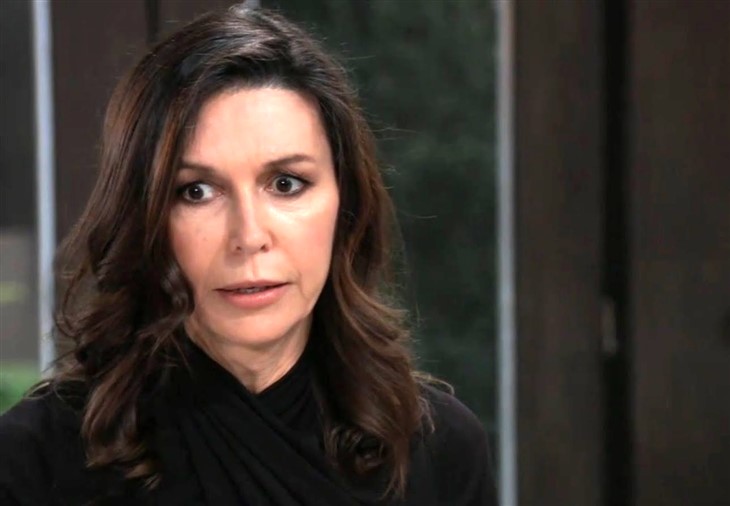 General Hospital viewers will recall from a recent episode of General Hospital that Anna and Felicia assured Robert and Mac Scorpio (Tristan Rogers, John J. York) they would be safe. Anna had explained they would be looking into paperwork about the cable car crash and if anything suspicious came up, she would make sure she and Felicia got out of there and into a safe place!

Mac finally calmed down when he acknowledged it had been Felicia who had saved Maxie Jones (Kirsten Storms) and baby Bailey Louise Jones (London and Jett Prinzo-Berendt) and took down Peter August (Wes Ramsey) in Switzerland. Obviously, Felicia could take care of herself and Robert knew from years of experience that Anna could as well – but still, danger will manage to sneak up on Anna when she isn’t looking, because the danger comes in an unexpected way. Quite possibly it comes in an unexpected form as well, because Felicia won’t notice it and Anna will be taken by surprise!

General Hospital viewers know that Victor’s henchmen are everywhere – no matter where it is in the world, he has a network of them worldwide, and Anna and Felicia are in Innsbruck to follow up on reports about one of them. General Hospital viewers will remember that Robert had gotten a report that Johann Bauer (Max Decker) was in the area when Luke’s cable car accident took place, and Laura Collins (Genie Francis) had become suspicious Victor was involved in Luke’s death.

Laura, Sam McCall, (Kelly Monaco) Dante Falconeri (Dominic Zamprogna) and Robert remain in Port Charles as well as Drew Cain (Cameron Mathison) to try and set a trap for Victor there while Anna and Felicia are overseas. Anna and Felicia, but especially Anna, should know that Victor would have people reporting back to him even over something as mundane as looking through accident records – any clerk, any other person in that office could be a Cassadine contact!

General Hospital viewers know that Anna and Felicia would take care to provide the people in Innsbruck with fake identities if they are undercover and possibly even disguises, but Victor is already several steps ahead of anyone who would come to investigate the situation. Even though Luke died a couple of months ago now, and Victor took the utmost care to “prove” it was an accident and not sabotage, General Hospital viewers can imagine he still knows someone will be suspicious and will come to investigate!

Therefore he has installed his spies in the records office, around the scene of the accident, and anywhere people would be inclined to look who have suspicions that the accident wasn’t so accidental! Even though Anna had ensured ahead of time any permissions needed to look through the records of the accident for both herself and Felicia under their cover identities, someone comes up behind her and startles her! Anna can feel a gun in her back as a threatening voice asks who she really is and what she is doing there and she knows that someone is onto her and Felicia – as they make a hasty exit!

Days Of Our Lives Spoilers – Allie Is All That Stands Between Johnny And Ciara’s baby!