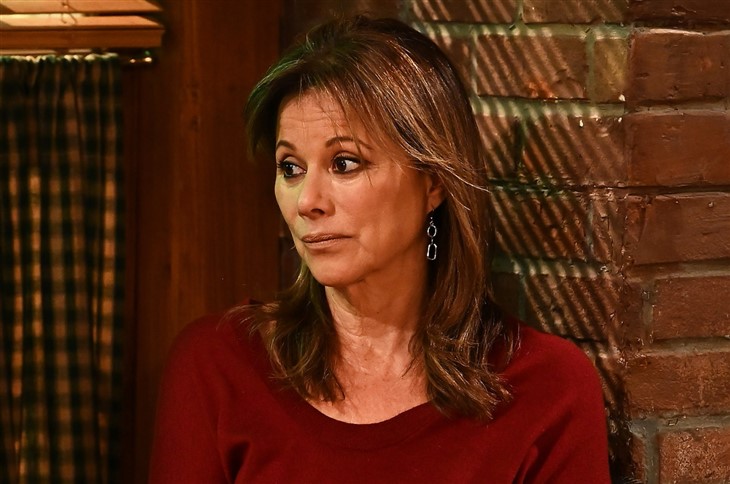 General Hospital Spoilers teases Alexis Davis (Nancy Lee Grahn) was ready to draw a killer out of the shadows and into the justice system, but she never thought the next target would be her nearest and dearest friend, Diane Miller (Carolyn Hennesy). Now that Diane is fighting for her life, will Alexis regret her decision to bait the killer? Will the publishing guru find herself becoming The Hook’s next victim?

Alexis sprang into action after Brando Corbin’s (Johnny Wactor) death. As soon as she overheard Hamilton Finn (Michael Easton) mention the weapon used in both Brando’s and Ava Cassadine’s (Maura West) attacks was a hook, the former attorney put her legal eagle mind to work and thought she could use her role as Editor-in-Chief of The Invader to lure the killer into making a mistake or leading law enforcement to a discovery of their identity.

Gregory Chase (Gregory Harrison) might not be ready to chew all that he’s just bitten off as her partner-in-crime on this editorial escapade though. Unaccustomed to Alexis’ work ethic, the snarky University professor just might think Alexis has gotten them both in over their heads. Still, he won’t leave her standing alone as she comes to regret her decision to tempt a murderer.

Alexis has spent years battling an addiction to alcohol. It has cost her many loves, friendships, and even her career as an attorney. She was delighted and humbled by the universe giving her a second chance with her new digs at The Invader, but an attack on Diane was the last thing Alexis expected.

When Alexis and Gregory arrived on the scene of the attack and saw Diane’s nearly lifeless body laying on the floor of Brando’s garage, Alexis was clearly shaken. Her usual take-charge attitude has gone out the window, and the only thing she can focus on is being near her friend in her time of need. Who will be by Alexis’ side? The same person who has been since Brando’s attack — Gregory.

While Gregory isn’t as famliar with the details of Alexis’ history with alcoholism as Finn is, being an alcoholic himself, his dad will provide a great deal of emotional support for Alexis as she waits to see whether or not Diane pulls through. Gregory might actually turn out to be the first guy Alexis has flirted with who doesn’t let her down during a crisis, which just may keep her away from the bottle, too.

Diane is going to give Alexis and her other loved ones quite a scare as she fights to survive this brutal attack. Fortunately, she’s going to come out on top, but as she fights to stay alive with the efforts of Dr. Finn backing her, Alexis will question how she could’ve been so careless. How Alexis proceeds going forward could change the landscape of the entire investigation. Watch GH every weekday and tune in here for more spoilers on what to expect next.